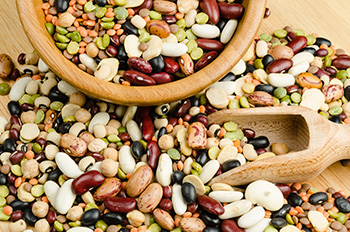 Mostly I love legumes because they taste so great, but when it comes to being able to build a meal that has it all - flavor, texture, fiber, great quality carbohydrates, protein - beans really top the list. They are one of the smartest ingredients for you to have on hand.

Take the simple black bean as a prototype. One half cup of cooked black beans contains 114 calories, with 20 grams of carbohydrates. And those are some quality carbohydrates, because there's only about 1/4 gram of sugars in that serving but over 7 grams of fiber. Couple that with almost 8 grams of protein and you have a great foundation for almost any recipe. This is not limited to black beans, of course, and navy beans, pintos, black eyed peas, kidney beans and fava beans are all comparable in terms of their great nutrition profile.

They also keep well, meaning that you can always have them on hand.

Dried beans are inexpensive and keep well as long as you store them in a tightly sealed container. Even though they are the ideal ingredient to keep on hand, they are a bit more hassle because you have to soak them overnight prior to cooking. Granted, you can use the quick method of soaking an hour in room temperature water and then simmering in a lot of water for an hour, but that also takes time that you may not have.

That leaves canned, and in some cases, frozen beans for the most convenience.

The first challenge with canned beans is that traditionally they contain added salt. This can be rather a lot of salt, too, so you have to be careful. A half cup of canned kidney beans contains about 325 milligrams of sodium, and that can add a lot to your dish. According to the USDA, that same half cup of canned kidney beans contains only 116 milligrams of sodium once it has been drained, so it clearly makes sense to take that extra step of pouring them into a strainer and running under cold water for a few seconds.

Cost can be a factor with the no salt added versions sometimes costing more (it always seems weird that I am being charged more for them to leave out the salt and a step in the processing). Fortunately, in the last few years that's become less of an issue, with the cost between salted and no salt canned beans narrowing - in some cases completely.

Looking in my pantry at the numerous cans of beans I have on hand, I find that the ones labeled "no salt added" come in at between 10 and 15 milligrams of sodium, so it's not necessary to drain and rinse if you don't want to. Depending on the application - a cream soup, say - adding the liquid to your recipe can add even more great bean flavor. This is, as you might expect, the same amount of sodium in the dried beans that you soaked and then cooked since most all ingredients contain some degree of sodium.

Given the difference of about 200 milligrams in a half cup between the traditional beans with salt and the no salt added variety you will want to make an adjustment to your recipe if you are going to use them. Here's a good rule of thumb for making that adjustment: a 15 ounce can of beans contains about 1 1/2 cups, or three servings. Given that you are saving about 200 milligrams of sodium per serving, that comes to about 600 mg - or about 1/4 teaspoon - of added salt that you might want to remove from your recipe. It may be a little less if the beans are to be pureed or partially crushed, since the sodium will permeate the recipe more than if they remain whole like in a clear vegetable soup.

Lastly, don't trust frozen to not have added salt. While there are not a lot of producers marketing frozen beans, the ones that I have seen are often as high in sodium as the canned, and there's no way to drain and rinse some of that salt away.