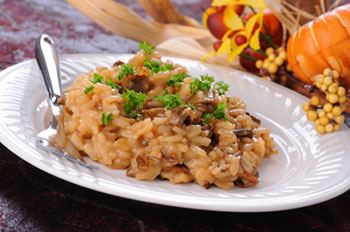 When I was in Italy I ate risotto. This wasn't about wanting to eat gluten free as much because there are always options for pasta (the Italian chefs were amazingly accommodating). Like in Spain, in France and England I had (gluten-free) bread service with most of my fine dining meals (U.S. chefs and restaurateurs take note, this is a really good way to build a very loyal clientele).

The reason I ate risotto is because the risotto in Italian restaurants is amazing. Not good, not great, not fantastic, but bordering on the transcendentally sublime. Every meal in Italy was very good to great, whether it was a simple breakfast, a pick-up dinner, or fine dining. I chose risotto most of the time, because while the gluten free pasta was good, it was, as you might expect, dried pasta. The few pastas that I had were OK, but the dish was good because of the sauce, not the pasta.

Most of the risotto that you get in the United States is made with arborio rice. This is a slightly round, short grained rice with a high starch content. The rice has a pearly sheen, and as it cooks, the rice has the ability to absorb a lot of liquid in the process and the starch is released into the cooking liquid to make a creamy, rich sauce. Arborio is grown widely in Europe, mostly in Italy, but it's also grown in Spain (where calasparra rice is more commonly used). There are lots of Italian rice varieties including valione, maratelli, and padano. Restaurants likely use carnaroli which is less likely to get overcooked when making risotto.

The term "risotto" refers to the Italian rice dish made with these rices, although the two terms have become nearly synonymous. The other common recipe using short grain / high starch rice is Spanish Paella.

It was clear from every plate of risotto served to me that the dish was cooked fresh. That's the first key to fantastic risotto. You can eat leftover risotto but, hey, those are leftovers. I have had risottos in restaurants - good restaurants - in America that were clearly made the afternoon before the evening's service. I had a chef tell me once that the owner of the restaurant demanded this. I felt so sad for them (the owner but more so the chef).

Why does it make a difference?

As the short/medium grains cook, they absorb water and give up starch. The water softens the grain and the starch works with the cooking liquid to create a thick sauce. Cooking the rice correctly means taking it off the heat at the moment when the rice is tender, plump, not grainy and, most importantly, not mushy. The rice will, however, keep cooking as it cools if it sits on the counter and there is a fine line between undercooked and overcooked risotto.

Not only was the rice in Italy of great quality, every single plate was right at that fine line - plump grains, not grainy, but firm with a rich sauce.

Now you could argue that risotto isn't all that healthy because it's not brown rice, but varieties such as Arborio are higher in fiber, coming in at just a little less than brown rice. The other advantage to risottos is that they can be complete meals with lots of veggies - onions, leeks, asparagus and the like - which bring more fiber to the dish.

The best part for you about making risottos is that they are quick: they can be an easy and fast weeknight meal but also can be an elegant dinner party dish.

Start with a bit of oil, add some onions, garlic or leeks. Cook a bit and add the rice, broth, and seasonings, then simmer carefully for about 15 to 20 minutes. Don't stir and keep an eye on the rice. The minute the grains go from being grainy to not, you are done.

The varieties are endless. Here are a few risotto recipes for you to try: