Report from London: The Fat Duck

One of the reasons I love to travel is being able to dine at a wide variety of restaurants, which are always inspiring. Even if the meal isn't very good, I generally take something away from the experience.

While in London I met for tea with a group of physicians that had come to New Orleans for a conference a few months ago. One of them asked why I had come to London and I told her that I'd come "to eat." She seemed shocked and said something to the effect of, "Why would you come to England to go out to eat?" The fact of the matter is that the U.K.'s reputation for offering nothing but terrible food hasn't been true for well over a decade. London has an amazing array of restaurants all across the spectrum, from the best of meals to the very, very bad. Most, however, are good to great.

No other country reveres its cooks like the U.K. does. A handful of chefs have become widely known in the United States, but none are household names as are many are in the U.K.. Heston Blumenthal is one such household name in England. He is not the father of modern cooking, but he, as much as anyone, packaged the idea of food as theater and a show that should appeal to all one's senses. It is impossibly difficult to get a reservation at his restaurant, The Fat Duck, but with a little help from a friend I was able to secure a table for lunch. So it was that on a Wednesday my wife and I set out for Bray, England for lunch.

Mind you, I was skeptical.

I have been disappointed by such restaurants in the past. Often the food is precious and cute, and the staff is full of themselves, acting as precious and cute as the food. So I arrived without the high expectations that I might ought to have had given the reputation.

Wow, was I wrong.

There are 14 courses on the lunch tasting menu. They are all small and very light courses, so it barely makes up a meal, but each course is a tiny delight on its own. The amuse bouche (literally, "something to please the mouth") sets the stage for those little pleasures, with a light beet puff and a touch of horseradish cream. The little balls were about the size of a big marble and disappeared with one bite, leaving the sweet flavor of beet and spicy horseradish. The texture was delightful - like inflated wispy lace.

The starter sets the theatric tone with nitrogen poached aperitifs. The diner has a choice of three aerated mousses piped onto a spoon and then poached in liquid nitrogen. This is done tableside with suitable flourish and is light and airy but in a much different way than the beet puff. The result was an ice-cold meringue with a light crunchy shell and rapidly disappearing mousse. My choice of the Gin and Tonic flavor was a light hint of the tonic and juniper flavor throughout and the tartness was a perfect start for the meal.

The next course brought a tiny bit of red cabbage gazpacho served with a mustard ice cream (yep, mustard ice cream). Note the size of the serving in the picture. Tiny but full of flavor, with slightly bitter cabbage soup, sweet finely minced cucumber and savory mustard. 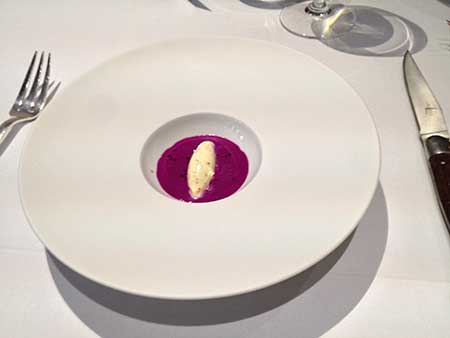