Barley is one of the oldest cultivated cereal grains and a great choice for soups, stews and casseroles. It has long been used in brewing beer and making whiskey, but it has also been a popular starch in many cultures. Unfortunately, it has not remained in favor as much as rice, pasta or potatoes, even though it is amazingly tasty and good for you - in many ways better than other starches. 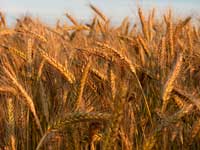 Barley must have its outer hull stripped away to make it edible. The form that is available in most grocery stores is pearled barley, which has been hulled and then processed to remove the bran. In the process it is polished, resulting in a pearled sheen.

Dehulled barley is also made into a variety of other products, including flour and cereals similar to oatmeal and grits. Hulled barley is more nutritious, because the bran layer has not been polished off, but it can be more difficult to find. You might find it listed as barley “groats”. It will take longer to cook than pearled barley, however.

When raw, barley it looks like a cross between orzo pasta and wheat berries. After cooking it has a lovely, nutty flavor. Barley can be easy to substitute for pasta or brown rice because of its slightly chewy texture. As such, it makes a great side dish, much like rice and pasta, as well as in chilled salads.

Barley has a ton of fiber (even pearled barley). A quarter cup of barley has 8 grams of fiber. There’s great research that barley will lower LDL cholesterol (bad cholesterol) and help stabilize blood sugars in diabetics. The beta-glucan fiber found in barley is similar to that found in oat bran, beans and peas. As a result, the U.S. Government now allows a health claim on barley that it lowers cholesterol.