Gluten Sensitivity
This recipe is safe for those who are sensitive to gluten. Make sure the yogurt is gluten-free.

"Savory...that's a swell word. And Basil and Betel. Capsicum. Curry. All great. But Relish, now, Relish with a capital R. No argument, that's the best." -Ray Bradbury

I first had a version of this korma at a restaurant in London. I had eaten korma before but that version was, unlike a lot of curries, not a strong, spicy, in-your-face flavor. The aromatics were more subtle, but at the same time there was a bit of spiciness to the dish and I fell in love immediately.

Many of the versions of korma that I have seen are much more like a tandoori or a vindaloo – especially the frozen versions that we have tasted here at DrGourmet.com. (It was, in fact, a frozen version of cauliflower korma that inspired me to revisit this recipe.) That version did have more of a vindaloo flavor: sweeter, more tomatoey, and creamier. It was OK but I wanted this more authentic recipe.

The addition of cashew nuts really adds a lot to this recipe. Because kormas are generally meat, having the texture of the roasted cauliflower and the cashews works perfectly together to offer the same textures.

This recipe can easily be multiplied, makes good leftovers, and freezes well. 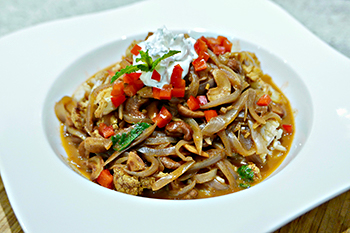 Place the cauliflower on a large baking sheet with 2 teaspoons of the olive oil.

Stir to coat the cauliflower with the oil and place in the oven.

Roast for 20 to 25 minutes, stirring occasionally so the cauliflower roasts evenly. Set aside until time to add to the sauce.

While the cauliflower is roasting, place a large skillet over medium high heat and add the garlic, ginger, and cashews.

Cook for about 3 minutes. Stir frequently.

Add the onions and cook for about 5 minutes. Stir frequently.

Cook for about 3 minutes. Stir frequently.

Add the water and reduce the heat to medium.

Add the cilantro and serve topped with the mint and yogurt.