I always get high hopes when I pick up another frozen meal for review. I guess that I'm a sucker for a pretty package. There's no doubt that the pictures on the package bear no resemblance to the food that's inside the box. I am almost always disappointed, especially with pizza.

The Lean Cuisine Brick Oven Style Gourmet Mushroom Pizza is no exception to this rule. Opening the package is always daunting because it looks so... well... frozen. OK, I know that it's a frozen pizza but they always look so awful in that state.

The aroma was fantastic when cooking. The pizza cooks on a little platform made from the box with a "browning tray" on top. This is a piece of thin metal that doesn't react in the microwave but will toast the bottom of the pizza. Initially the flavor lived up to the smells coming from the oven with a much more intense mushroom taste than one would think of from a frozen pizza. This is ruined by an odd, plastic-like creamy texture of the sauce.

Crust is the real place that this pizza fails. There is simply no real good pizza dough flavor -- no yeast, no substance. It appears to be a stab at a foccacicia type crust but it just comes out doughy. When the bottom is crisped this makes the bottom half almost too chewy to eat. 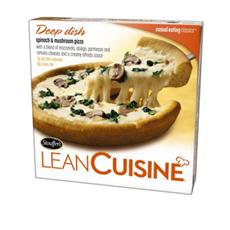 Overall a pretty bad pizza but nowhere near as bad as their Deep Dish Spinach and Mushroom version. The only thing deep dish about this pizza is the thickness of the crust which is about 3/4 of an inch thick. Again the package is so alluring but it simply doesn't turn out that way. No dripping cheese on this pizza as the box promises.

Not only is the crust is thick and bread-like, it has no flavor at all. There is a thin layer of a filling with even less taste. The label claims "a blend of mozzarella, asiago, parmesan and romano cheeses and a creamy alfredo sauce." It's gooey, not cheesy like a good thick alfredo sauce should be. The fine flavors of the cheeses mentioned don't come through -- only a bland creamy taste. An occasional whiff of a mushroom or some spinach flavor, as if your tongue says, "Oh yeah, I knew that taste once."

Better to pick the Roasted Vegetables with Red, Yellow and Poblano Peppers Pizza from Rick Bayliss' Frontera Foods. This is actually a pretty good pizza.