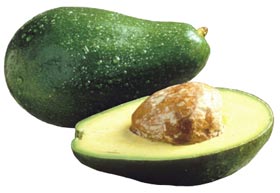 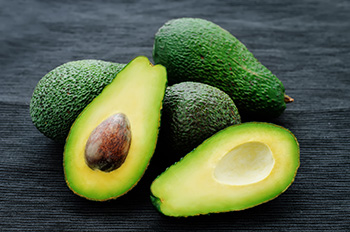 I love avocados. I have loved them since I was a kid when my mom would serve them garnished simply with her fantastic French Dressing. There was a time, though, when avocados had gotten a very bad rap. That was in the day when we had less information about fat in the diet and it was felt that ALL fat was bad (not so).

OK, we know better now. The best part of knowing better about avocados is that you can eat them without feeling like you’re committing some low-fat, healthy diet sin. Just the opposite. They’re really good for you.

Avocados grow in tropic and subtropic climates. They are actually a fruit and not a vegetable and are one of my favorite healthy foods. For a long time the only avocados available in the grocery were from Florida and California. Even though Florida was the first state in the U.S. to cultivate them, about 80% of domestic avocados in the grocery today are from California and the most common you will see is the Haas avocado. (There is now a huge import market from Central and South America.)

The Haas avocado is the one with the pebbly skin and is a little smaller in size. The other common variety is the slightly larger, more teardrop shaped, Fuerte. Look for evenly colored green or dark green skin with no cuts or blemishes.

Because of today’s produce market, avocados are available pretty much year ‘round. Like most fruits they are very fragile and are now picked very much unripe. The best way to ripen them is as you would with peaches, by placing them in a paper bag for about two days. You can find ripened ones in the market because they ripen fairly quickly but it’s a bit of a treasure hunt. A ripe avocado will give slightly to very gentle pressure. Don’t refrigerate them unless they have been cut. I prefer to eat them fairly quickly after they ripen, but they will keep up to about a week in the fridge.

Avocados are essentially a fat. While a cup of slices is only about 120 calories, it’s mostly fat. But... they are really low in saturated fat and have tons of good monounsaturated fat (read that GOOD fat). They also have a lot of fiber, as well as being high in Vitamin C.

Eat your fruits and vegetables and keep your mouth happy
Oral cancer, primarily a disease that occurs in men, was the seventh most common form of cancer—for both sexes—in 2002. Over 210,000 death are caused each year by oral cavity and pharynx cancers. The primary risk factors are well known and include chewing and/or smoking tobacco and consuming alcohol. Often nutritional and dietary deficiencies are linked to oral cancers, but recent research studies have sought to determine the effect of fruit and vegetable intake.

Magnesium and irregular heart beats
A number of my patients have trouble with irregular heart beats. It can be very common and is people call this many different things. Some feel they are having "skipped beats" or a "flip-flop" of the heart. Many will call these palpitations and it is best described as a feeling that the heart has jumped or beaten out of sequence.

More fruits and vegetables, less heart disease
I've written on many occasions about the positive effects of fruit and vegetable consumption on such conditions as oral cancer and gallbladder disease , as well as contributing disease factors like inflammatory markers and DNA oxidation. A recent French meta-analysis of the results of several prospective studies has specifically examined the relationship between fruit and vegetable intake and risk of coronary heart disease (CHD)

Eating A Mediterranean Diet Reduces Your Risk Of Becoming Obese
I have written extensively on how a Mediterranean style diet can help prevent disease. A group of researchers using information gathered in Spain about dietary patterns looked at how a diet that closely adheres to the Mediterranean patterns affects weight gain.

Yet another reason to avoid trans-fats
You've seen it in the news: Trans-fatty acids have been linked to an increased risk of inflammation (leading to heart disease and cancers), insulin resistance and type 2 diabetes. Researchers at Harvard and the Brigham and Women's Hospital in Boston, Massachusetts noted recently that factors relating to insulin sensitivity may have an effect on female infertility, which affects about 7 million women who are trying to conceive. Could eating foods containing trans-fatty acids be linked to infertility?

Fruits and vegetables for prostate health
Benign Prostatic Hyperplasia (BPH) happens to almost all men as they age. It's a non-cancerous enlargement of the prostate whose most common symptom is difficulty in urination. Usually it's not a serious problem, but it can affect the sufferer's quality of life. Just how much someone's life is affected by their BPH symptoms is measured by a standard questionnaire called the American Urological Association Symptom Index (AUASI). The higher the score on the questionnaire, the more the patient is bothered by their symptoms.