"My first diet was in the first grade! Tuna fish and mustard with yogurt on the side." -Wendy Williams, TV Personality

Canned tuna is a great base ingredient. You can take tuna salad made with canned tuna so many directions, and this version with sun-dried tomatoes is a great example.

You do have to be careful with sun-dried tomatoes, however, as they can overpower a recipe really quickly. Soaking them is key, but tasting the tomatoes you purchase is critical. There can be a wide variation in the intensity and often the bitterness of the sun-dried tomatoes, which is why soaking the tomatoes to reconstitute them is so important. This dish is better made at least a few hours before you are going to serve it so that the flavors have time to meld together.

Cooking time: 30 minutes (does not include chilling time)

This recipe can easily be multiplied and keeps well for about 24 to 48 hours in the refrigerator. 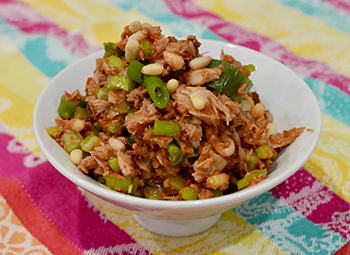 Place a medium skillet in the oven and preheat to 325°F.

When the oven is hot add the cherry tomatoes and onions and return the pan to the oven.

While the tomatoes are roasting, pour the boiling water over the sun-dried tomatoes. Let steep for 15 minutes and drain.