Lactose
This recipe contains sour cream and some of those who are lactose intolerant may be able to tolerate it.

Gluten Sensitivity
This recipe is safe for those who are sensitive to gluten. Check for modified food starch in mayonnaise and sour cream.

"Chutney is marvelous. I'm mad about it. To me, it's very imperial." -Diana Vreeland, Editor, "Vogue" Magazine

There are hundreds of ways to make chicken salad (or shrimp or tuna or etc.). Don't be timid. Mixing strong flavors, such as chutney, curry and raisins, makes for a rich taste while using less fat and calories.

This curried version does just that and the stronger, spicier Madras curry powder brings an even bolder flavor to your chicken salad. The bit of zing from the addition of cayenne pepper in the Madras curry can be replicated by combining a milder curry powder with pinch of cayenne in this recipe.

The optional chutney really makes this salad with a bit of fruity, vinegary tang to the recipe. Saying chutney is a broad statement as there are about as many varieties of chutney as there are stars in the sky. Some are smooth and more liquid, such as Jamaican Pickapeppa sauce. This company also makes a terrific Tamarind Chutney that is great in this chicken salad.

Cooking Time: 30 Minutes (does not include chilling time)

This recipe can easily be multiplied but keeps well for about 24 - 36 hours only. 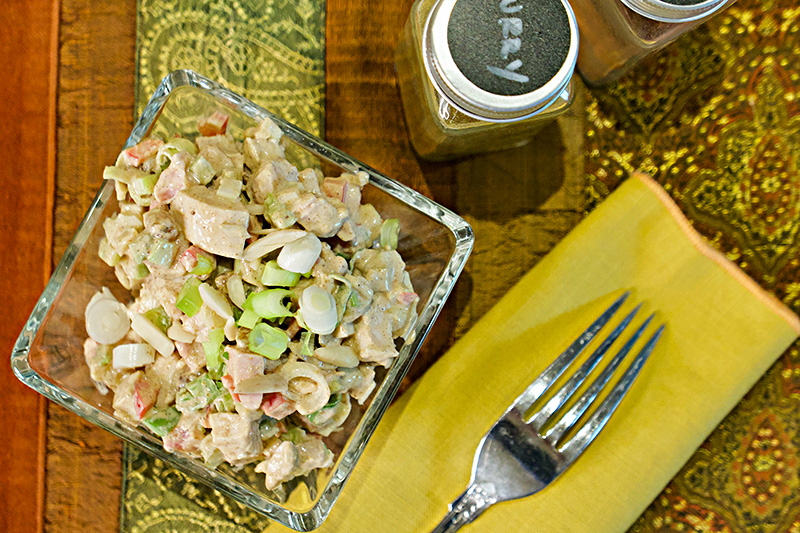 When the oven is hot add the chicken to the pan and cook for about 8 minutes.

Turn and cook for another 4 to 5 minutes.

When the chicken is cooked, remove it to a cutting board and let it cool for about 15 minutes; then put it in the refrigerator to chill.

After the chicken is chilled place the mayonnaise, sour cream, yogurt, curry powder, cinnamon and salt in a medium mixing bowl.

Whisk together until well blended.

Add the raisins, celery, red pepper and almonds to the bowl.

Cut the chicken into 1/2 inch cubes and place in the mixing bowl.

Fold the chicken together with the other ingredients until well coated.

Chill for at least an hour before serving.

Top with the sliced green onions and optional chutney before serving.