Lactose
This recipe is NOT safe for those who are lactose intolerant (although you could leave out the sour cream).

Gluten Sensitivity
This recipe is safe for those who are sensitive to gluten. Check for modified food starch in the sour cream and make sure the tortillas are gluten-free.

"I wish they made fajita cologne, because that stuff smells good. What's that you're wearing? That's sizzlin'!" -Mitch Hedberg

Fajitas seem like something you can only get in a restaurant. The word fajita actually refers to the strips of meat, usually skirt steak, that were cooked on a grill. Since fajitas were popularized in the U.S. during the 1970s, almost any ingredient is used, from beef and chicken to fish and shrimp.

These Shrimp Fajitas are so easy to make at home. Preparation of the shrimp takes a few seconds to toss in the oil and spices and after that it all you have to do is cook the veggies and shrimp. One key is to cook the onions first, followed by the peppers and then the shrimp. If you are using this recipe with beef or chicken, it is a good idea to add them a few minutes earlier – about two minutes into cooking the peppers – so that they cook completely.

This recipe can easily be multiplied and leftovers will keep for about 48 hours refrigerated. Leftovers are good served cold. 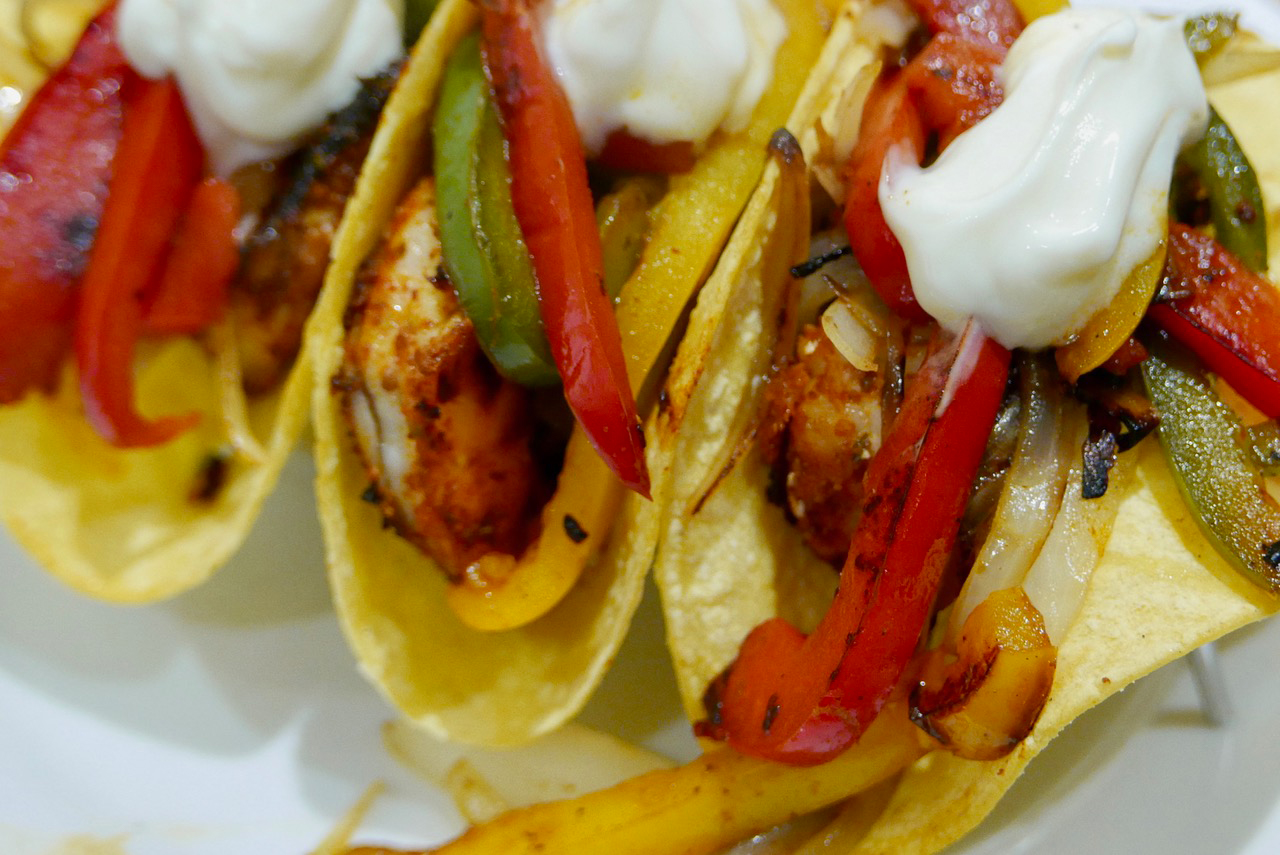 Place the shrimp in a small mixing bowl and add the chili powder, cayenne pepper, oregano, paprika, cumin, salt, and 1 teaspoon of the olive oil.

Toss gently until the shrimp are well coated.

Place a griddle or a large skillet over medium high heat.

When the griddle is hot add one teaspoon of the olive oil and then the sliced onions.

Cook the onions for 5 minutes. Toss frequently. Adjust the heat so that the onions brown lightly but do not burn.

Add another teaspoon of olive oil to the griddle. (If you are using a large skillet, move the onions to one side of the pan first.).

Place the peppers in the skillet and cook for about five minutes. Toss frequently.

Add the shrimp to the griddle. (If you are using a skillet, you may need a second one.)

Cook the shrimp on one side for about 3 minutes and turn.

While the shrimp are cooking continue to toss the onions and adjust the heat so that the peppers and onions continue to brown but not burn.

Cook the shrimp on the other side for 2 to 3 minutes.

Divide the shrimp and onion/pepper mixture among the 6 tortillas and serve topped with sour cream.