Gluten Sensitivity
This recipe is safe for those who are sensitive to gluten. Use gluten-free pasta in this dish.

Linguine with Clam Sauce is one of my all time favorite dishes. There are dozens of varieties of white clam sauce (and dozens more red variations). I spent my teenage years in New Jersey and this is pretty similar to the one that was cooked by my friend Rudy's mother. She started with prosciutto and it had green peppers in it too. It wasn't all that creamy - she used whole milk and not cream. Pair this with a mushroom salad and you have a nearly perfect meal.

This recipe can easily be multiplied but does not make very good leftovers. Serve with a side salad. 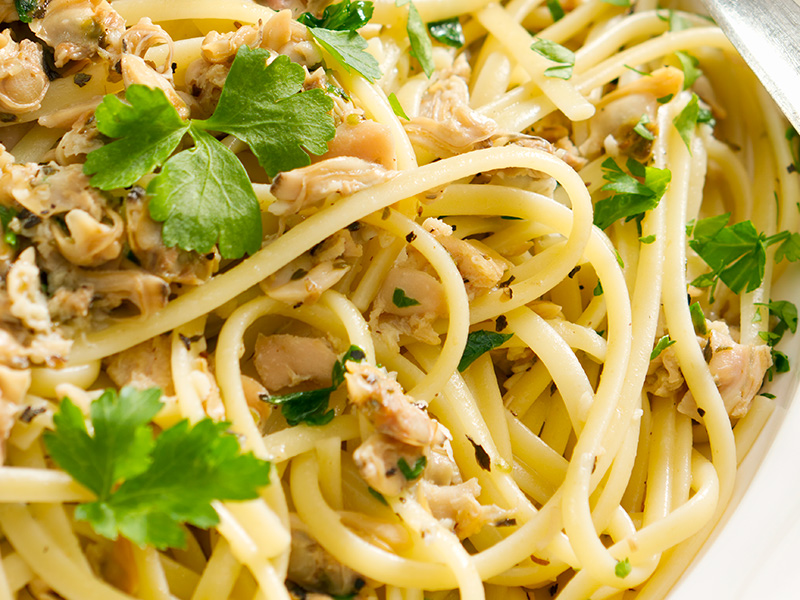 Place 1 cup water in a large skillet over high heat. When simmering add the clams and cover.

Cook until all the clams open - about 4 minutes. (Any clam that fails to open is dead and should be discarded. But try tapping on the shell first.)

Remove the clams, reserving the broth, and then shuck the clams from the shells. Strain the broth through a fine mesh sieve to remove any grit.

Rinse out the skillet and place the strip of bacon in the skillet over medium high heat. Cook for about 10 minutes. When the bacon is cooked, remove it to a cutting board and dice. Leave the bacon fat in the pan.

Place the remaining water in a medium stock pot over high heat. When the water boils, add the linguine.

Place the skillet with the bacon fat over medium heat and add the shallot, celery and diced bacon. Cook for about 5 minutes, stirring frequently.

Add the wine and the strained clam broth to the pan. Season with the pepper and add the oregano.

Cook over medium high heat until the liquid is reduced by about 2/3.

Add the clams and goat cheese. Remove from the heat and stir until the cheese is melted.

Add the drained linguine, toss well to coat and serve.