Coraline was disgusted. "Daddy," she said, "you've made a recipe again.'

"It's leek and potato stew with a tarragon garnish and melted Gruyere cheese," he admitted.
-Neil Gaiman, Coraline

Brown rice does take longer to cook and some people like their rice a firmer and others a bit softer. If you like it a bit softer, add an extra half cup of water. When cooking brown rice it is important to keep the pan partially covered with a lid so that the water doesn't boil off too fast. Set the heat so the rice is just at a simmer and cover with the lid set to one edge of the pan, leaving about a 1/2 inch opening. 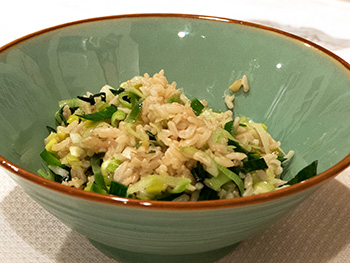 In a medium sauce pan, heat the water and salt. When the water boils, stir in the brown rice.

Reduce heat to medium-low and simmer, partially covered, for about 25 to 30 minutes.

Do not boil away all of the liquid and do not stir the rice.

When a very small amount of liquid remains, remove the pan from the burner and let it stand, covered, for 5 minutes before serving.

While the rice is cooking, place one teaspoon of the butter in a medium skillet over medium heat.

When the butter is bubbling, add the green part of the leeks.

Cook for about 4 to 5 minutes. Stir frequently

Add the white part of the leek and cook for about 4 to 5 minutes. Stir frequently. If the leeks are done before the rice, remove the pan from the heat and set aside, leaving the leeks and sauce in the pan.

When the rice is done, add the leeks to the rice, using a rubber spatula to scrape the butter sauce from the pan into the rice.

Add the remaining 1 teaspoon of butter and the pepper to the rice and leek mixture. If the leeks have cooled while waiting for the rice to be done, place the rice and leeks back over medium heat, stirring frequently, until the rice mixture is hot.