"I am not a fan of people who abuse service staff. In fact, I find it intolerable. It's an unpardonable sin as far as I'm concerned, taking out personal business or some other kind of dissatisfaction on a waiter or busboy." Anthony Bourdain, Medium Raw: A Bloody Valentine to the World of Food and the People Who Cook

This recipe is simple but deceptively complex. It just is not rocket science to put these ingredients together but the balance of the sweetness, creaminess, umami, saltiness and the black pepper just works. It is the pepper that brings all of this together I feel.

Prosciuttos can vary widely in the amount of sodium they contain. I have seen some with as much as 770 milligrams of sodium per ounce (each individual slice is usually about 1/2 ounce). For this recipe the prosciutto I used had about 440 milligrams per ounce. I generally like to find hams that are imported as they are a bit lower in sodium.

Cooking time: 60 minutes (does not include chilling time) 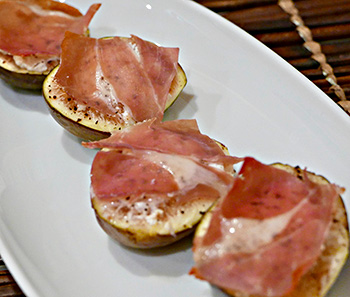 Spray a large skillet with spray oil and add the figs, cut side up.

Allow the figs and cheese to sit at room temperature until the goat cheese is soft enough to spread evenly over the top of the figs.

Grind the black pepper over the stuffed figs.

Cut the prosciutto into 16 squares (about 8 squares per slice) and place 1 square on top of each fig.

Place the figs in the oven and cook for 10 minutes. Serve immediately.