"If you can mock a leek, you can eat a leek!" -William Shakespeare

I love fondant potatoes. They turn out rich and creamy and full of flavor from the stock they absorb. This recipe, cooking leeks as if they were potatoes, is just as good and super simple to make.

The key to this recipe is to get the pan hot and add the oil and butter, then sear the leeks on either side to get them a bit browned before adding the braising liquid.

This recipe can easily be multiplied and keeps well for about 24 to 48 hours in the refrigerator. 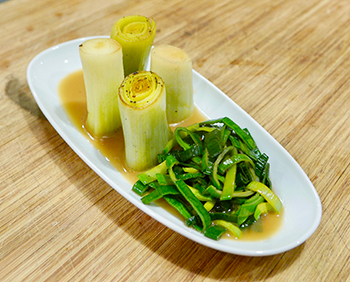 Slice the root of the leek (the white part) about 1/8 of an inch from the bottom of the leek, and discard the root.

Cut the remaining white part of the leek into 2-3 inch pieces (depending on the size of the leek).

Place the butter and olive oil in the skillet and place the leeks,standing up on end in the pan.

Return the skillet to the oven and roast for about 15 minutes.

Turn the leeks over to the other cut side and roast for an additional 10 minutes.

Add the salt and vegetable stock and return the pan to the oven.

Braise the leeks for another 25 to 30 minutes until most of the liquid has evaporated.