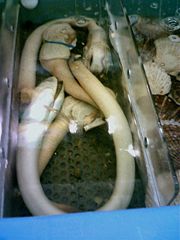 I love clams and don't eat them as often as I could. They are simple to make and delicious, but they're also a really healthy choice.

The first time I had clams was a revelation. It was the early 1970s and if you wanted clams in Atlanta you could have them by opening a can. Fresh clams just weren't an option. My father brought some home from Boston in a package sold at the airport called "clambake to go." It had clams, oysters, crabs and even a lobster packed in dry ice. The other selections were good, but when the clams were done steaming I was immediately in love.

There are two varieties of clams - hard shell and soft shell. There are several sub-varieties based primarily on where they grow as well as on the size of the clam (clams are measured by the diameter of the shell).

The "neck" is the siphon through which clams collect nutrients and soft shell clams have a longer neck than their hard shell cousins. Because of this, the shell of soft shell clams cannot close completely. Soft shell clams found in the Atlantic Ocean are often simply sold as "steamer" clams. More often you will find that east coast hard shell clams labelled (smallest to largest) as littleneck (<2 inches), cherrystone (a little larger at about 2 1/2 inches and sometimes called top neck clams) and the quahog, a.k.a large or chowder clam (3 inches). I am partial to littleneck clams and because they ship well they are the most widely available away from the coast.

The most notable west coast hard shell clams are the pismo (found on Pismo beach). The small butter clam found further north in Puget Sound are small and very tender clams much like littlenecks. Soft shells found on the west coast include the razor clam (there is an east coast clam called razor but this is not a true razor clam) and the geoduck clam (pronounced gooeyduck). The latter is a large six inch clam that can have a neck as long as two feet.

In the colder East Coast and Pacific Northwest waters, clams are available year round. Further south on the West Coast, the season ranges from November to April.

If you are careful clams can keep up to five days in your refrigerator. It is best to keep them on a bed of ice or wrapped in a damp towel. The clams are alive so don't store them in an airtight container. When buying hard shell clams, tap the shell and the clam should close. If it doesn't, it is dead. Soft shell clams should retract and move a bit when the protruding neck is touched.

Fresh clams can be gritty. You can soak them in water with a bit of cornmeal to help purge any grit inside the shell. Make sure that you add a little salt to the water (clams are, after all, saltwater animals). Use about 1/3 of a cup of salt in a gallon of cool water. You don't need much cornmeal - two tablespoons or so. The clams will feed on the cornmeal and expel the grit and such that are inside the shells.

For a chowders, any clam will do but the smaller the clam, the better. They are sweeter and give the chowder a more delicate flavor. Cooking clams should be done carefully over low heat to keep them from overcooking and getting tough. It genearally takes less than 5 minutes to steam clams.

When I was growing up I thought all clams came in a can. This is a food phenomenon that I like to call the Dr. Gourmet Green Bean Theory.

Canned clams are the same. If you know that they are a completely different product than fresh, understand that, and simply enjoy them for what they are, then you have clam dip. Not the same clam dip as if you had used fresh clams but it is still clam dip.