Back in June we reviewed two pizzas from Lean Cuisine's Culinary Collection line, one deep-dish, and one with a traditional, thin crust. Surprisingly, we found that one of them was actually pretty good: their Deep Dish Three Meat Pizza. So much of the frozen pizza we've tested has been so very bad that it was more than a little surprising to find one we could actually recommend based on flavor and on the amount of sodium, which at 590 milligrams is pretty darn low for a pizza. 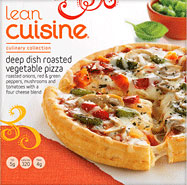 This week we have another pizza duo from Lean Cuisine, both with under 500 milligrams of sodium per pizza. Since the deep dish pizza we'd tried back in June was so good, our panel decided to taste the Deep Dish Roasted Vegetable Pizza first. Once again, these pizzas are microwaved while placed on a silvery toasting surface on the inside of the box, then allowed to sit for one minute in the microwave to finish cooking. Do be careful with these - even after a minute these are quite hot.

The instructions on these suggest adding another 15 seconds to the cooking time for a crispier crust. We chose to go with the basic cooking instructions, figuring that the thicker crust might not necessarily benefit from a longer cooking time. In retrospect, that might not have been such a good idea. This pizza smells good as it's cooking due to its fairly good pasta sauce: moderately tomatoey with a clear note of oregano. The problem is that there isn't much of it.

As you know, it's hard to get pizza right. Sure, it's a maxim that "pizza is like sex: even when it's bad, it's still pretty good," but we here at Dr. Gourmet have had some bad pizza. But to make good pizza, all of the elements have to be right, and while the crust is a large part of the pizza, the toppings have to balance out the crust. Not enough in quantity or flavor, and the pizza's boring. Too much, and it's practically an open-face sandwich and not a pizza at all.This Roasted Vegetable Pizza suffers from a lack of toppings - our panel estimated that the amount of topping actually on the pizza would have been right for half the crust. And it's too bad, as the roasted red and green bell peppers, mushrooms, and tomatoes have great flavor - when they're there. "Stingy," the panel agreed. 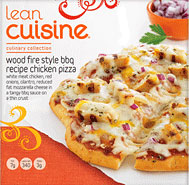 Right from the start we were much more optimistic about the Wood Fire Style BBQ Recipe Chicken Pizza. Unlike the Roasted Vegetable Pizza, the amount of toppings on this pizza are much more impressive even before they go into the microwave. After cooking (and we gave this one the extra fifteen seconds of cooking time), this is still an impressive-looking pizza. Generous amounts of sweet and tangy brown-sugar-and-molasses-based barbecue sauce tops chunks of juicy chicken along with diced red onion.

The only drawback to this pizza is that it could use a little more cheese, but overall, a very good substitute for the barbecued chicken pizza sold at places like California Pizza Kitchen. We checked the nutrition facts for the frozen version of CPK's barbecue chicken pizza and found that 1/3 of the pizza (one serving) has 310 calories and 810 milligrams of sodium. Lean Cuisine's version is proof that so much sodium just isn't necessary: this one-serving pizza has 340 calories, only 400 milligrams of sodium, and 3 grams of fiber. While making Barbecue Chicken Pizza from my recipe is really easy - most of it can be cooked ahead and assembled just before baking - this is a really good pizza for lunch at the office.