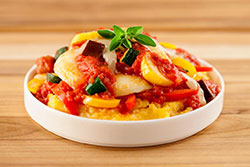 I have said this many times when writing this column: I just don't know why the category of frozen breakfast food exists. Breakfast is so easy that it seems silly to spend about three or four times as much money than you have to by pulling a package from the freezer and heating it in the microwave. It takes about the same amount of time to toast a slice of bread and scramble an egg. But there are more and more breakfast foods in the freezer case, leading me to believe that there is demand, so here we are reviewing a few more.

Artisan Bistro is a brand that we generally think well of here at Dr. Gourmet World Headquarters. They have had some misses but their seafood meals are amongst the best on the market. We had high hopes for their breakfast products and started with the Mediterranean Breakfast Stack.

This has a very nice creamy polenta base and is topped with a flattened hockey puck of cooked egg white, which is topped with a tomatoey vegetable mixture. The polenta texture is remarkably good and is not dry as one might expect from a frozen product. The egg is also surprisingly good, with only a slightly rubbery texture – not great, but not offensive either. All of this is topped by a ratatouille-like mixture that is a little more Mexican in flavor than Mediterranean. 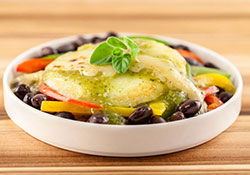 The Huevos Rancheros Verde is a really great concept. I love the idea of having legumes for breakfast, and this meal is served with a layer of black beans topped with the same hockey puck of egg white that is then topped with some vegetables and green sauce. Spicy and pretty good, but both of these meals suffer from the same problem: they are incredibly salty. Not a little bit salty or overly salted. They are offensively salty.

The ratio is about two and a quarter milligrams of sodium per calorie, and in the end all you can taste is the salt. It is so salty it almost burns the mouth.

This is a shame because of all the breakfast meals we have tasted these could have been good. The beans were good, the polenta good, the egg is even good. The salt simply overwhelms the flavor and the meals are really bad.