I am puzzled by Healthy Choice's so-called "Complete Meals." There are two types: "Traditional Classics" and "Modern Classics." All of the varieties in these two lines are what one could loosely describe as "comfort foods" in that these are meals that are likely to be familiar to most Americans. They include such things as roasted turkey breast, meat loaf, and various pastas, along with Asian foods that are so ubiquitous as to have passed into the American consciousness as comfort foods as well, such as sweet and sour chicken. 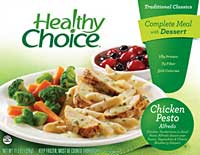 Naming strategies of convenience meal manufacturers aside, we have two meals from Healthy Choice's Complete Meals, one "Traditional" and one "Modern," to taste today. The first, Chicken Pesto Alfredo, is from their "Traditional Classics," and as you have probably guessed, includes a dessert. The good news is that this is good-sized chunks of properly-cooked chicken in a rich, creamy parmesan-basil sauce over pasta that is not too overcooked. In the ingredients list the pasta is described as being made from "whole grain wheat flour," and while that might well be whole grain, it isn't whole wheat flour, which would help the pasta stand up to cooking even better. But when it comes in such a tasty sauce, that's not much to complain about. It comes with a side of broccoli and carrots, and although the broccoli is still crunchy, it's more chunks of broccoli stems than broccoli crowns, and the carrots are a little overcooked.

Thus far this meal would get a pretty good rating from us. But the dessert, if you'll pardon the expression, sours the whole thing. On the box it's described as "Cherry Blueberry Dessert." I would describe it as "Cherry Blueberry Pie Filling," because that's really what it is - cherries and blueberries in a purple liquid sugary goop. It's too bad, really, because although I expected it to be over sweetened and positively sugary, it's not. It's not very tart, either, but it's not overly sweet. The sauce is the problem: there's way too much of it. This dessert would be better and more accurately described as "sauce with cherries and blueberries," because there are three (yes, I counted) cherries and between a dozen and twenty pea-sized blueberries in about a quarter-cup of sauce. What a waste! 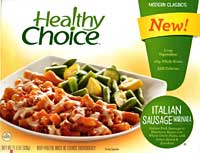 The "Modern Classic," Italian Sausage Marinara, is a great contrast to the Chicken Pesto Alfredo. Both have the same number of calories (310) and 7 grams of fiber, while the Marinara has just slightly more sodium (580 mg) than the Chicken (560 mg). But you get so much more with the Modern Classic that you never miss the dessert. There's a generous veggie side dish of green beans, zucchini and yellow squash that leaves the green beans well and properly cooked but the squashes rather more cooked than I would like. Again, something that's easy to overlook when taken together with the entree, which in this case is essentially the same oh-so-slightly-overcooked pasta with a really stellar tomato and Italian sausage sauce. This is the same kind of Italian sausage you'd crumble over your pizza and it's good stuff - just a little spicy and very savory. There's quite a bit of it, too, in a bright, flavorful tomato sauce with a strong oregano component. Top this with a fair amount of mozzarella cheese and you have a real winner - and one that's easily twice the volume of the entree in the Chicken Pesto Alfredo. This one's a real keeper.

Long-time readers of Dr. Gourmet will know that I feel that desserts are something to be indulged in only occasionally and should not be a regular part of your diet. For that reason alone I would hesitate to recommend any convenience meal that includes a dessert. But the contrast between these two meals is a good illustration of why I personally don't bother with desserts (or do so only very rarely): few, if any, desserts taste as good as they are described, and given a choice between a bad dessert and great food, I'll choose the great food every time.