The Glutino products that we've reviewed have been a bit inconsistent. Granted, it's tough to make gluten-free foods when the main ingredient is wheat flour, as with pasta or pizza dough (not to mention bread!). We rated two of Glutino's frozen pizzas a while back and they were pretty good. They used brown rice, which makes for a better crust - they were nice and crispy. 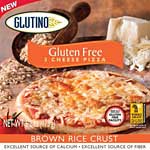 Gluten-free products tend to be lower in fiber than the same foods made with wheat flour, because the flours that offer some similiarity to wheat flours are themselves low in fiber. So most pizzas made with rice flour are usually very low in fiber, coming in at only 1 or 2 grams per serving. I was happy to see two new Glutino pizzas made with rice flour and coming in at 3 times the fiber (6 grams).

The Three Cheese Pizza with Brown Rice Crust was a mixed bag. The crust is crispy, with a little more texture, somewhat like the difference between white and whole wheat pizza crust. The toppings were underwhelming, however. There just wasn't all that much sauce or even very much cheese. The sauce I guess was supposed to be tomato sauce, but it had a dark brownish color like barbecue sauce. (If you had told me that this was a barbecue pizza, I might have believed you). All in all just not a very good pizza - but a good crust. 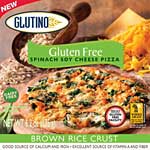 The Spinach Soy Cheese Pizza with Brown Rice Crust is just plain awful, however. I was dubious just because the soy cheeses I have had are not very good, and reheated from frozen is even more concerning. Again, the crust is pretty good with a nice crisp texture. The toppings at first blush taste strongly of anchovies. Anchovies can be good on pizza - but not when your pizza is supposed to be spinach and cheese. Here it's just inedible.

Tragically, the crusts are good and Glutino would do well to sell them in packs of 4, so that people with Celiac disease could make pizzas with their own toppings.