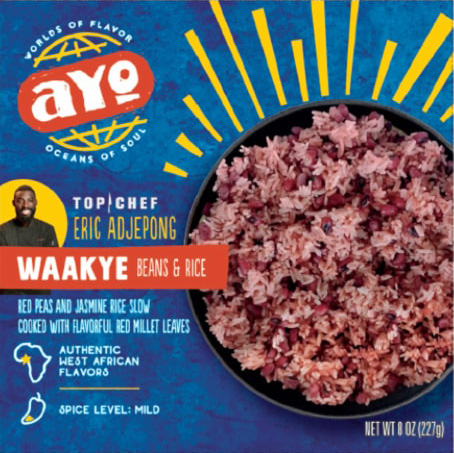 Believe it or not, after over 15 years of near-weekly reviews - and about 1,500 products - truly new frozen meals are few and far between. We do revisit products from the past, as you likely know: companies do change their products' formulation, and sometimes that means a thumbs-up from us rather than a thumbs-down. After those 15 years, however, we're excited to discover new companies in the frozen food aisle with dishes that meet our nutrition standards.

We spotted today's offerings at our local Whole Foods Market, placed horizontally on the floor of the ranks of frozen foods as if they were a merchandising afterthought. The bright colors of the boxes were what drew the eye initially, but what was really interesting was the "Authentic West African Cuisine" on the front of the packages.

The company is Ayo Foods, founded in 2019 by a husband and wife team, Perteet and Fred Spencer, who hoped to inspire their consumers "to explore the world with their taste buds." Perteet grew up eating many of the West African foods that the company now offers in the frozen food section.

As it happens, today's offerings come from their partnership with Eric Adjepong, the first Ghanaian-American contestant on Top Chef and a finalist.

The first dish to come out of our microwave was the Waakye, a dish of jasmine rice with red peas. This has 380 calories, 660 milligrams of sodium, and an astounding 12 grams of fiber. (Twelve grams of fiber? With white jasmine rice? Yep.).

We didn't think it looked like much either, but boy were we wrong.

Just out of the microwave this smells strongly of coconut and ginger with a hint of roasted garlic and a whiff of Jamaican curry. The rice itself is not what most people think of as jasmine rice: fluffy white long grain rice with distinct grains. Instead the grains seem to be broken up, and cooked, its texture is closer to couscous or really well-cooked quinoa: a bit grainy. That's not a criticism, however, otherwise the dish might be simply mushy.

The red peas are firm but not crunchy, and the sauce is an impressive, well-balanced blend of sweet red bell pepper and coconut, savory tomato and garlic, and spicy ginger and curry, with just the faintest burn of habanero on the back of the tongue. (Note that this is marked "mild".)

Honestly? This is a game-changer like evol was before it sold out. This is vegan food the way vegan food should be: rich, flavorful, and satisfying food that happens to not contain any animal products. Certainly one of the best things we have eaten all year at Dr. Gourmet, and given the amount of fiber in this dish, we aren't particularly bothered about the 660mg of sodium. 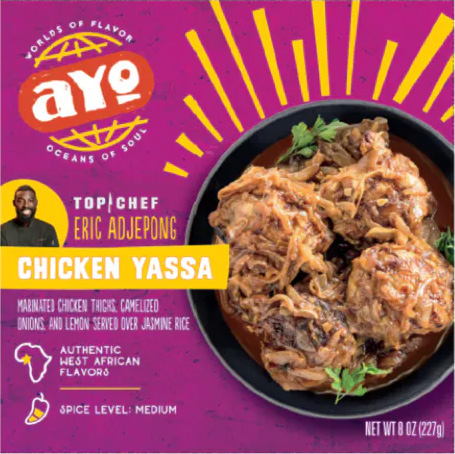 We deliberately tasted the Chicken Yassa second, as its spice level is marked "medium", and we wanted to approach the heat cautiously. Even more to the point, we looked at the numbers and were not just impressed, but actually amazed: 530 calories, 100 milligrams of sodium, and 1g fiber. One. Hundred. Milligrams. Of sodium. Not a typo.

We can't remember when we had a main course frozen meal with that little sodium. It may well be never. 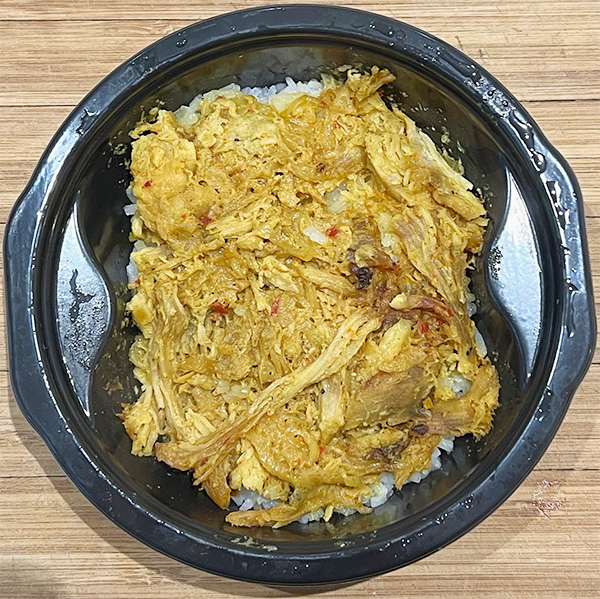 This is described as "marinated chicken thighs, caramelized onions, and lemon served over jasmine rice."

Kudos to the chef for using chicken thighs, as in my opinion they're far more flavorful than chicken breast - and the difference in the amount of fat is minimal. Here they're presented as pulled chicken in a sauce that we could easily use as an example in our Culinary Medicine module on sodium and flavor balancing: the bright, tangy lemon and Dijon mustard easily hit the taste receptors as salty when balanced with the umami of the chicken thighs against the smooth blandness of the white rice (which is perfectly cooked).

The only drawback we could see is that the dish could use a little more sauce - some of the chicken turned a little dry and a bit of additional liquid would have prevented that. While this was marked "medium" spice, as we mentioned, there was no burn at all and we would have thought this would have been marked "mild". No matter, as there's plenty of flavor without additional zing.

Even so, both are highly recommended. $5.99 is the recommended retail price, and for what you get, we think it's well worth it. We'll be looking for other frozen meals from Ayo Foods.