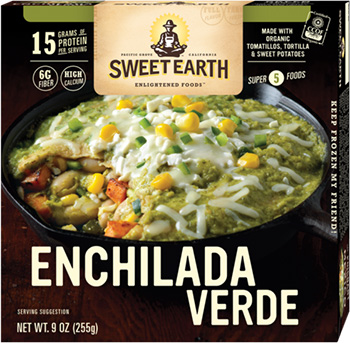 Our panel always perks up when I say that we have items to review from Sweet Earth Foods. On the whole their frozen foods have been exceptionally good, with only a few items receiving a negative review. All of their burritos have been good, and only a couple of their bowls, and just one of their veggie burgers have been less than stellar. That's an exceptional track record for a frozen food company.

This week we have two varieties of what some in my tasting panel called "a burrito in a bowl:" an Enchilada Verde and a Borderless Enchilada. ("Okay," admitted a panelist, "they're really an enchilada in a bowl. Whatever.")

Both are simply cooked: about 3 minutes in a 1200-watt microwave, with another minute resting in the microwave after cooking. The Enchilada Verde (390 calories, 450 mg sodium, 7 g fiber) appeared a little disappointing at first: "doesn't seem like there's much there," noted one panelist (see below). 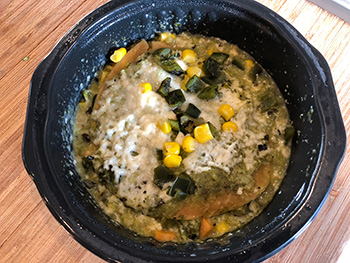 The bowl is a little less than half full, reminding us of the mac and cheese dishes from evol (not good). On the other hand, there are fresh-looking diced green chilis and corn scattered on top of a fresh corn tortilla, and unlike other corn tortillas we've run into recently, that tortilla is soft and tender, with a sweet masa corn flavor and not a hint of toughness. Indeed, the dish has an overall scent of tart lime, bitter cilantro, sweet corn, and pickled jalapenos.

While the filling beneath the corn tortilla might be thinner than the panel would like, they felt that the savory white beans, tender sweet potatoes, and crunchy corn and green chili peppers would be "plenty satisfying." The one drawback they found is that the dominant flavor of the dish is "very tart" - "almost vinegary," which while almost certainly due to the tomatillo sauce, might be off-putting for some and would almost certainly present a problem for those sensitive to acidic foods. While the panel gave this a thumbs up, they caution that the dish is "rather one-note" and may not be to everyone's taste. 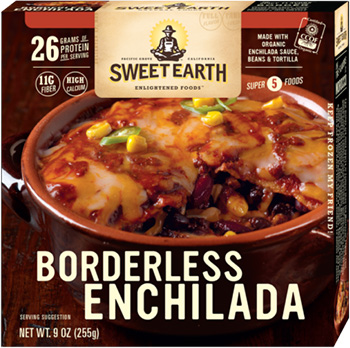 They didn't feel that was the case with the Borderless Enchilada (470 calories, 570 mg sodium, 7 g fiber). The same sweet and tender tortilla as in the Enchilada Verde is covered here with a moderately spicy enchilada sauce that smells of cinnamon and chipotle peppers over a filling that includes firm and meaty black and kidney beans as well as Sweet Earth's chipotle seitan (a wheat-based meat substitute). That filling is described on the package as having 2 1/2 "flames" out of 5 in terms of heat, which according to the panel is "not particularly spicy." 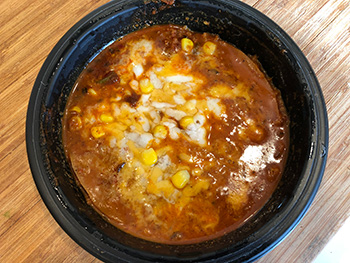 Sweet and crunchy corn also punctuates the otherwise fairly smooth enchilada filling. "What does this remind me of?" a panelist wondered out loud. "It tastes most like... like a beef enchilada!" The rest of the panel agreed: while the flavor of the filling isn't specifically beef, they agreed that "ground beef" was the closest description for the enchilada's flavor. "That's a good summary, actually," one panelist said. "Like a beef enchilada in a bowl." Thumbs up here as well.