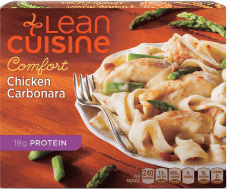 Today we set out to revisit two Lean Cuisine meals we last reviewed back in 2009 (I can hardly believe it either): Linguine Carbonara and Shrimp Alfredo. Neither originals did very well in our tasting although we did give the Carbonara a thumbs up. As we've noted before, however, food manufacturers frequently rework their formulations, so after 7 years it's worth updating our review.

As it turns out, Lean Cuisine does not appear to make their Linguine Carbonara any longer - at least it's no longer on the Lean Cuisine website. The original had no meat other than a few slivers of bacon, but this newer version has added chicken and asparagus, making it more of a complete meal. The Shrimp Alfredo, on the other hand, looks very much the same: shrimp with broccoli and peas in an Alfredo sauce. But were either improved?

Unfortunately, the Chicken Carbonara was definitely worse than the original. The panel noted right away that despite the depiction on the box, there are no asparagus tips in this dish whatsoever, just 3/4-inch lengths of stem of varying thicknesses. They're painfully overcooked and can easily be mashed with a fork. By contrast, the pasta is only moderately overcooked ("that's damning it with faint praise," remarked another panelist). The half dozen medium-to-small chunks of chicken are stringy and not quite dry, "but not juicy either."

What really nailed the coffin on this dish was the sauce. It smells "plasticky" and tastes of nothing but fake smoke flavor. Worse yet, it leaves a "nasty" aftertaste of chemicals. True enough, a check of the ingredients revealed not only yeast extract (which may mean MSG) but also potassium chloride, which food manufacturers like to use as a sodium alternative. This meal already has 660 milligrams of sodium to go with its 240 calories and 2 grams of fiber, so adding more salty flavor is just ridiculous. Leave this one on the shelf. 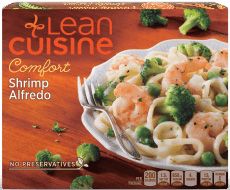 The Shrimp Alfredo was the surprise of this tasting. Seven years ago we described the Alfredo sauce as "a travesty" and the shrimp were overcooked despite starting out (apparently) raw. This time the 8 small shrimp came out perfectly: tender and sweet. While the broccoli is a little overcooked, it's acceptable and still has some crunch. The peas also seem fresh and retain their firm texture as well. The big change is in the sauce: while it's still thinner than I would like, it's far, far less watery than the original and has a fine garlic and cheese flavor. While the pasta is definitely overcooked, the panel liked everything else about the dish so much that they insisted we give it a thumbs up. (200 calories, 650 milligrams sodium, 2 grams fiber) Interestingly, this dish also uses potassium chloride, but the aftertaste that gives away its presence wasn't nearly as offensive ("hardly even noticeable") as in the Chicken Linguine. Get more shellfish in your diet with this dish.