Every week I wander through the frozen food aisles of my local grocery stores looking for something new to review that also meets our nutrition criteria. If you're new to our Food Reviews, you should know that the first thing we look at on a package is the amount of sodium: we simply won't review anything with 700 milligrams of sodium or more per serving. That may seem high, but we're also looking at the ratio of sodium to calories, preferring that it be no higher than 2:1.

The first burrito we tested for today's review is right at that cutoff, having 220 calories, 440 milligrams of sodium, and 5 grams of fiber. We followed the instructions on the package to microwave it and placed the unwrapped, frozen burrito on a microwave-safe plate, then covered it with another microwave-safe plate. Cook two minutes, flip the whole thing over, cook another minute, allow to rest for one minute.

It sounds easy enough, until you pull the plate out of the oven to flip it and it's already split down the side and stuck to the plate, necessitating the use of a spatula to flip it over. After the second cooking and resting the burrito is split not just at one point, but down both sides, completely defeating the purpose of a burrito: you'll never pick this up in your hand.

It's too bad, because the filling has good chili and lime flavor, with savory black beans, nutty quinoa, bursts of sweet corn, a few shards of chard, and diced broccoli stem (we found no evidence of florets). The tortilla, however, "is as gummy and doughy as anything I've ever seen," said a panelist. "You'll never get that out of your teeth." Amy's didn't separate the ingredients for the tortilla from the ingredients for the filling, but it appears that they used rice flour as well as sorghum flour and garbanzo flour to make the stickiest, most chewy tortilla I have ever had the misfortune to find. The verdict? "Just no."

The Southwestern Burrito didn't survive its trip to the microwave any better. One panelist remarked, "It looks like somebody barfed in a tortilla."

The whole wheat (no, this burrito is not gluten-free) tortilla split down one side and disgorged its contents entirely: 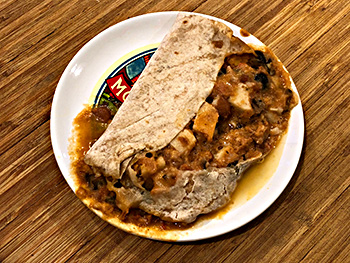 Those big chunks you see are potato, and the whole is rather more watery than the picture conveys. Despite its appearance, the filling here is really good, with a fantastic masa corn flavor along with tender kidney and black beans. There's a touch of poblano and lime flavor and the Jack cheese is sweet and smooth. "Honestly, one of the better burrito fillings we've ever had," said a panelist as the others nodded.

It's a pretty great tortilla, too: the whole wheat gives it a slightly sweet and nutty flavor, and it's nice and tender: too bad you can't pick this one up either. Yes, there are oven instructions that take 30 minutes or more, and if you have that kind of time, you should certainly try this one (but not the Gluten Free Black Bean & Quinoa). We'll have to give it a thumbs down for microwaving, however - and that's most likely what you'd be doing at work.