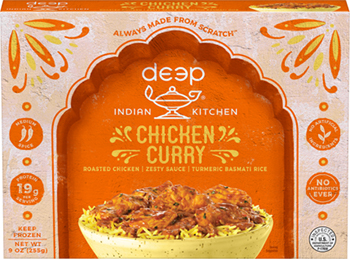 I almost didn't notice today's new products in the frozen food aisle at Whole Foods. They were on the floor of the unit - not even on a shelf - but their bright colors caught my attention.

I first thought that this company would be a competitor to such companies as Saffron Road and Tandoor Chef, but that's only partly right. While Saffron Road is a completely different company (that incidentally also offers halal meals), Deep Foods is a rebranding of Tandoor Chef - which explains why we haven't seen any new products from Tandoor Chef recently.

In the last few years the company has also widened its scope from frozen foods to brick-and-mortar restaurants that are called "Indikitch" and described as "Chipotle® for Indian food." (There are five locations in New York City; if you've eaten at one, please share your thoughts below in the comments.) 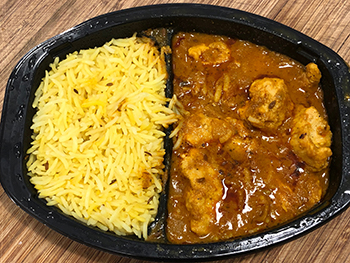 This Chicken Curry smells great. The pretty sizeable chunks of chicken breast are pretty juicy, although one or two of the smaller pieces were a little on the dry side.

The basmati rice is fluffy and tender and has a definite, but not overwhelming turmeric flavor. (As always, I would have liked to see brown rice used for the sake of more fiber as well as depth of flavor.)

The curry sauce is just thick enough and truly savory with a moderate level of spice (it's labeled "medium spice"). We found it "a little salty, but not outrageous."

Mixing the curry sauce and chicken with the rice, however, tempered the saltiness and softened the spice, leading one panelist to note, "If I got this at a cheap takeaway in London, I'd be happy." 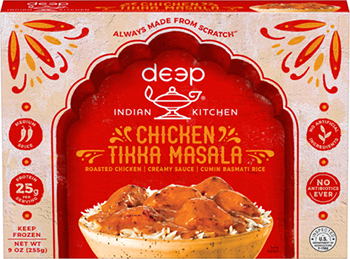 The Deep Kitchen version of Chicken Tikka Masala is a huge improvement over the Tandoor Chef version. The Tandoor Chef Chicken Tikka Masala that we reviewed in 2013 had 400 calories, 710 milligrams of sodium, and 0 (zero) fiber. The Deep Kitchen version (also gluten-free) has 360 calories and only 530 milligrams of sodium - but still no fiber. 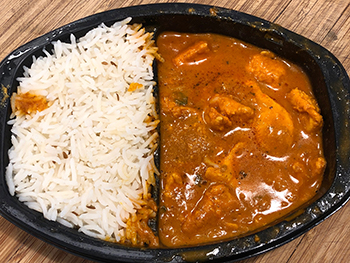 This time the same tender basmati rice is dotted with cumin seeds with a lovely flavor that's present, but not overwhelming (there's a recipe idea for the future).

The chicken (again, breast) chunks are really juicy and satisfying, and the complex sauce of tomato and onion is thick and rich, with just enough zing to satisfy most spicy-food-lovers while still appealing to those with less adventurous tastebuds.

As with the Chicken Curry, the chicken and sauce alone is a little salty, but mixing the sauce with the rice - which, as a panelist observed, "is sort of the idea," balances the flavor nicely. All in all, "excellent." We paid $5.99 each for these and felt they were worth it.