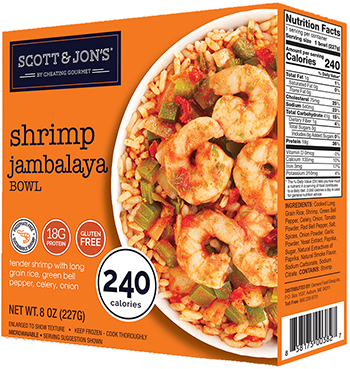 With today's review of two more bowls from Scott & Jon's we've now covered all of the varieties available at our local grocery store. Back in July we were introduced to their company with their Shrimp Scampi Pasta Bowl and Shrimp Alfredo Pasta Bowl, which were rather good, but we had to give one a thumbs down because of the sodium content - it was just way too salty to the taste over and above the actual numbers.

Then a couple of weeks ago we reviewed their Garlic Butter Shrimp Rice Bowl and Cilantro Lime Shrimp Rice Bowl, which were salty and soapy (from too much cilantro) respectively. Only 1 in 4 of the products we've reviewed thus far have been acceptable, and at $5.99 apiece there's no excuse for that.

Both of today's bowls are gluten-free. The first made the entire table of panelists roll their eyes in unison: Shrimp Jambalaya. We've tasted just a few different products that claim to be Jambalaya-like, and all of them were terrible. Others, like those from Zatarain's or other Louisiana-born companies, we won't review because of the incredibly high levels of sodium. 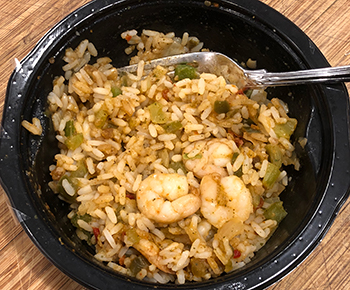 Jambalaya, as you likely know, is a Cajun rice-based stew that includes the "holy trinity" of onions, green bell peppers, and celery as well as sausage or wild game (or both) and often shrimp. (There are likely as many recipes for Jambalaya as there are Cajuns.) This variation has 240 calories and a not-too-bad 540 milligrams of sodium, but only 1 gram of fiber.

When we stirred the dish at the halfway point in cooking we noticed that "it smells like fake smoke flavor," and sure enough, "natural smoke flavor" is right there in the ingredients. Fake? Natural? We think "smoke flavor" as an ingredient on its own counts as fake regardless of its origin.

"Y'all. This is just WRONG," said a panelist whose family has been in New Orleans for generations.

On the one hand, many of the elements are there: the shrimp are nicely cooked (as we've come to expect from Scott & Jon's), the (white) rice is tender, the spice blend of paprika and cayenne gives it a little zing, and there's a fair amount of diced green bell pepper to be seen. However, green bell pepper is about all you can taste - "that and the fake smoke flavor," as a panelist pointed out. It doesn't even taste all that salty even though salt is the 8th ingredient in a list of 17.

The verdict? Well, it's not jambalaya of any kind, but as a dish with green bell pepper and some spices it isn't bad. Like the other offerings from Scott & Jon's, this does also have sodium carbonate as well as sodium citrate, which gave the dish a slight metallic aftertaste. Given that aftertaste, that it's not what it claims to be, and the green bell pepper flavor is quite strong, we can't recommend it. 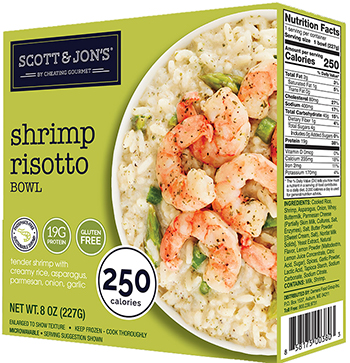 The final variety from Scott & Jon's was their Shrimp Risotto Bowl (250 calories, 400mg sodium, 1g fiber). As a chef I must point out that this is not, in fact, risotto: it is made with long grain white rice, not arborio rice, which is what the Italian rice dish is made of. 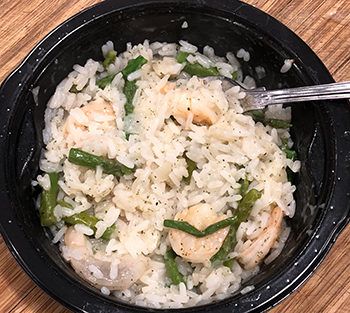 But we forgive them, because this is actually really good.

Along with the (exceptional) shrimp, this has plenty of tender cuts of asparagus that aren't gummy in the least, as microwaved asparagus can so easily be. To give this the creaminess of risotto the company used a combination of buttermilk and parmesan, and the parmesan flavor comes through loud and clear. Lots of black pepper gives the dish some brightness, and although it also contains sodium citrate and sodium carbonate, there's no metallic aftertaste. This may well be the best seafood frozen meal we've ever had.