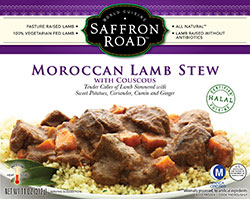 We've been keeping an eye out for an opportunity to review more of Saffron Road Foods' new "Nueva Cocina Mexicana" line. Back in March we tasted their Chicken Enchiladas Poblano, and in February we had their Beef Chile Colorado and Achiote Roasted Chicken. All three received positive reviews, and we're glad to have found their Enchiladas al Chipotle for reviewing today.

First, however, we're reviewing one of Saffron Road Foods' original line of frozen meals: their Moroccan Lamb Stew. We've avoided it in the past because of its 680 milligrams of sodium (370 calories, 4 grams fiber), but one of our readers wrote to us to tell us that we'd been missing out. "It's one of my top five," she said, "and I spent 20 years eating frozen meals at work. Now my husband and I have this for dinner one or two times a month."

We do try to review things when we're asked to (except when we can't find them locally), so today, your wish is our command, Margaret.

This meal separates the couscous and the lamb stew itself into two compartments of the cooking tray. After 4 minutes in the microwave, we stirred the stew, fluffed the couscous, and put it back in, uncovered, for another 2 minutes. Some of our panel expected the couscous to be too dry after this treatment, but it is surprisingly tender. By itself couscous doesn't have a lot of flavor - much like plain pasta - and that may account for the higher level of sodium in this dish. The picture on the box shows the stew served on top of the couscous, after all.

The lamb stew itself got rave reviews all around the tasting table. The "pretty big" chunks of lamb are juicy and tender, while the slightly smaller chunks of sweet potatoes are soft but still firm enough to keep their shape in the stew. The sauce smells fantastic, with notes of cinnamon, cumin, and cardamom and a reportedly "just a little spicy, with a nice afterburn." The sweetness of the potatoes cuts through the spice nicely. Mix the stew with the couscous as they do on the box and "this would be really filling." We'll give this one a thumbs-up with a caution for the higher sodium content. 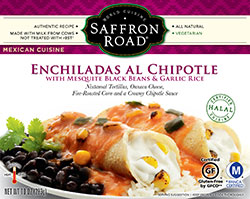 And a good thing, too, as unlike the other meals from Saffron Roads Foods' new line, the Enchiladas al Chipotle did not fare well with the tasting panel. The first indication that things would not go well came while the meal was still cooking: "Why does it smell chemical-y?" remarked one panelist. "It smells like... like lye."

Fortunately I could explain. The tortillas the enchiladas are made with were made with nixtamal, which is dried corn that has been treated with potassium hydroxide (lye) or calcium hydroxide (ash) to make its nutrients more bioavailable. (Here's an article on Nixtamalization.) The good news is that the meal itself doesn't have a chemical flavor, although the chemical scent can be off-putting to some.

It doesn't really have much flavor at all, and what there is can be overpowering. Unlike the Enchiladas Poblano, the white rice here is plain, plain, plain, while the black beans are dry, dry, dry, with a slightly smokey aftertaste. The tortillas themselves are tender, have a light corn flavor, and are filled with a nondescript white cheese. The real disappointment is the sauce. It's a cream sauce very lightly flavored with chipotle and has a faint zing to it. The problem is that there isn't enough of it. "Maybe a couple of teaspoons," ventured a taster. "If there were more sauce you could mix it all up and it would be pretty good," said another. Worse yet, there are a few quarter-sized chunks of poblano pepper scattered over the top of the meal, and every time you get a bite containing one of those chunks, that's all you can taste. Overall, not well thought out. Leave this one on the shelf.