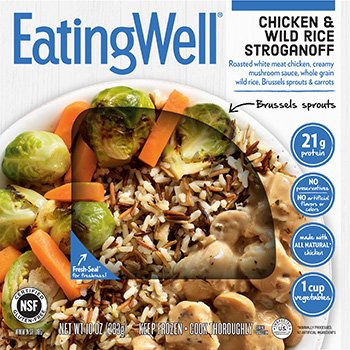 While EatingWell's four previous review items have been evenly split between thumbs up and thumbs down, our panel was still upbeat when I unveiled the products we'd review today. It's been the sodium levels that have been the most damning count against EatingWell products, and to be honest, I'm a little disappointed: it's not that hard to make sure sodium levels are within reasonable boundaries.

The tasting panel was interested to see if the sodium in each meal would negatively affect our review, as they did with the Cherry Port Pork or the Steak Carne Asada. Both of today's products are on the higher end of the calorie to sodium ratio, with the Chicken & Wild Rice Stroganoff at 610 milligrams for 290 calories and the Gnocchi with Garden Vegetables a bit lower at 540 milligrams of sodium for 350 calories.

We started with the gluten-free Chicken & Wild Rice Stroganoff. With 290 calories and 610 milligrams of sodium, this has over 0.475 milligrams of sodium per calorie - or a 0.47 to 1 ratio of sodium to calories. Quite frankly, that's not particularly good, although it's certainly better than some. The good news is that it has 6 grams of fiber due to its combination of brown rice and wild rice. That mixture has a light, nutty flavor that mixes well with the mushroom gravy in this dish, which combines the umami of sauteed mushrooms with the aromatic note of thyme: a subtlety unusual in microwaved meals.

The chunks of "white meat" chicken in this dish can be a bit dry depending on whether you bite into a larger or smaller chunk, and the Brussels sprouts are softer than we'd like, albeit they have a deep, roasted flavor. (The panel noted that our readers may prefer that texture, however.) The large matchstick carrots, however, retain their sweetness and crunch, and are a nice counterpoint to the umami of the mushroom gravy and the bitterness of the Brussels sprouts.

While the dish as a whole "could use a little less salt," the panel felt this was a "good meal," and "would eat this again." 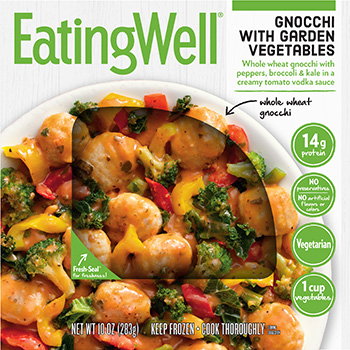 The Gnocchi with Garden Vegetables had similar problems with excess sodium.

We gave the dish some leeway with respect to the gnocchi, knowing that even gnocchi reheated in a professional kitchen could not match with gnocchi freshly made: expecting microwaved gnocchi to be as good as fresh is simply ludicrous. These gnocchi, made with whole wheat flour, are as good as any frozen and reheated gnocchi have any right to be, being a little thick and chewy but otherwise soft and tasting of whole wheat flour.

The gnocchi come with julienned red and yellow bell peppers, broccoli, and kale in a tomato vodka cream sauce. The peppers are sweet and crunchy, while the broccoli is only a bit overcooked, at least to our taste. The kale is cut so thin that it's barely noticeable: at first we mistook it for bits of broccoli. The sauce is tart and bright with tomato and thick with the umami of romano cheese. On the whole, however, the sauce is a bit salty. Not off-puttingly so, but the amount of salt is noticeable. One hint as to why is in the ingredients list: the vodka in the vodka sauce is listed as "cooking vodka (with salt)."

Long-time Dr. Gourmet readers may recall that I advise against using cooking wines or cooking liquors, because in order to be sold as ingredients they must be made undrinkable - which usually means adding a lot of salt. Better to use unadulterated wines or liquors in your food, not only because they taste better, you have more control over the amount of salt in your finished dish.

We'll still give the Gnocchi with Garden Vegetables a thumbs up.

Read all reviews of EatingWell products »