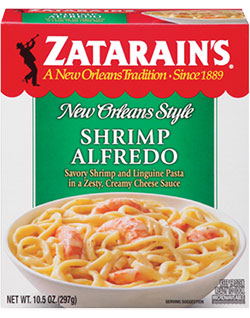 To be very honest, Zatarain's is a brand I've been avoiding tasting, for a few reasons. The first is the easiest and most obvious: too much sodium. Until today, the variety I'd found with the least amount of sodium had a whopping 730 milligrams and most of the others had 820 milligrams or more per serving. The second reason is the track record local frozen foods have had with us: Emeril's meals looked like one serving but were actually two, while the meals from Savoie's Foods don't even bear describing in retrospect (read both reviews for yourself if you must know). The third reason is that although Zatarain's is a storied New Orleans food brand (their packaging states, "A New Orleans Tradition Since 1889"), they are not, in fact, a New Orleans company, at least not any more: they are owned by McCormick's (the spice company).

All of that avoidance was working quite well until one of the members of our tasting panel brought in today's items. They were very pleased with themselves for having found Zatarain's products that are within our sodium guidelines, and said, "Now we can make all those locals who keep asking us to review some Zatarain's happy."

All quite true, and even better, I thought, is that these meals have shrimp in them - and if you've been reading our reviews for a while, you know how hard it is to find fish or shellfish meals that are any good. Perhaps we would be pleasantly surprised.

And at first we were: the Shrimp Alfredo comes out of the microwave with a thick and creamy sauce that's light on the garlic flavor but has a nice hit of chili powder to give it that "New Orleans" zing that people seem to expect. While there are only six shrimp, they're a reasonable size (bigger than a quarter), and since we used some care in cooking this with our 1200-watt microwave, they're only a little bit over done. They are, however, a bit bland, having no real shrimp flavor. The pasta isn't too terribly mushy and the numbers aren't bad: 470 calories, 520 milligrams of sodium (a very respectable sodium-to-calorie ratio of .9), and 3 grams of fiber.

The bad news is that along with the 17 grams of fat and 8 grams of saturated fat, the student who brought them in should have read Wednesday's Health & Nutrition Bite before purchasing the product. If they had, they would have noticed the "Trans Fat 1g" in the Nutrition Information and put the product back on the shelf. Even without those trans-fats, perusing the list of ingredients on the back of the box should have told them that this doesn't meet our standards: the only cheese this product contains is cream cheese. The ingredients list does, however, include two variations on "cheese flavor" and an ingredient called "sharp cheddar cheese flavor." Hydrogenated soybean oils are the source of the trans-fats, and it also contains yeast extract, which is another name for monosodium glutamate. And that reasonable amount of sodium is only possible because they also use potassium chloride for that salty flavor. To be fair, many other companies do as well - this alone wouldn't disqualify Zatarain's from tasting. It does, however, give this meal that slight metallic aftertaste that signals the presence of salt substitutes. 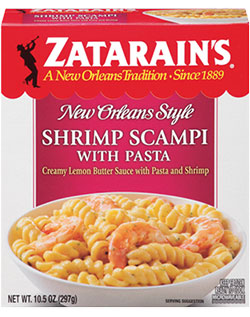 We still had another variety to taste after that disaster, so we went ahead and cooked up the Shrimp Scampi with Pasta, more out of a sense of completeness and a desire to avoid throwing away food unopened than because we really expected to be able to recommend it, ingredient information notwithstanding.

This is much more what we would expect out of a frozen meal, that based on the ingredients alone should be called "a food-like substance." The same six shrimp appear in this dish but surprisingly have more flavor to them than those in the Alfredo. That said, the panel noted that the sauce "smells plasticky" and reminds them more of Mac and Cheese than scampi, except with an "overwhelming" chili powder flavor. The pasta spirals aren't too overcooked, but overall we'd give this a thumbs-down on the flavor alone.

A lesson for our panel member, and one for you, too. Don't stop reading at the sodium number; read all of the Nutrition Information (they missed trans-fats right on the label!) and glance through the ingredients before making your purchase.