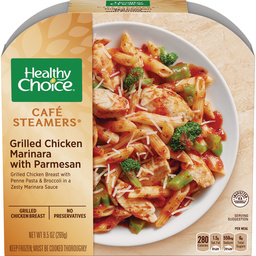 This week we return to what I think of as one of the "big three" in frozen foods: Healthy Choice. (The other two are Lean Cuisine and Weight Watchers.) Looking at Healthy Choice's track record with us, it's no wonder our panel looks a little dubious every time we pull out an item with the green and white logo: of the over 60 items we've reviewed thus far, only 23 have received positive marks. One in three isn't very good odds, yet we still persevere, because if you're going to eat frozen meals like these, we want you to know which ones are worth your money.

This week we started out by revisiting an item we first reviewed way back in 2012. From Healthy Choice's Cafe Steamers line, both meals we tested for today microwave in about 3 and a half minutes, steaming the food in a little plastic colander suspended above the sauce. The panel noted that the Grilled Chicken Marinara with Parmesan (250 calories, 580 mg sodium, 6g fiber) smelled "quite fetchingly" of garlic and tomato, and indeed, that's exactly what the sauce tastes like. It's a not-too-sweet, "tangy" pasta sauce with a definite oregano note - bits of oregano are actually visible in the sauce. "One of the better pasta sauces I think we've had," said a panelist.

As for the other elements, the chicken slices look obviously processed and have that overly-smooth texture that goes along with the processing. On the down side, each and every bite of chicken tastes a little salty, but the panel felt that this was likely the sole source of salt in the meal - "the sauce certainly doesn't taste salty," they said. The penne they declared "not too overcooked, just lacking bite," and the broccoli benefitted the most from the steaming process: "nice and crunchy and sweet," they said.

Overall? "I'd eat this again." Considering that our previous review said that the meal had "no flavor that I could detect," we have to congratulate Healthy Choice on the significant improvement. 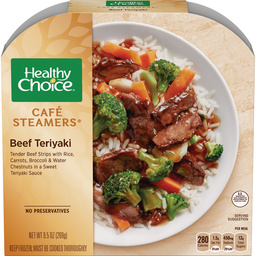 I noticed something interesting about the next review item, the Beef Teriyaki. As I was reading the package to record the relevant nutrition information (280 calories, 450 mg sodium, 2g fiber), I realized that this clearly newer packaging also includes the added sugars - 10 grams in this particular meal. It's nice to see companies adopting the proposed changes to the Nutrition Facts panel in advance of their being required.

Although the panel expected that those 10 grams of added sugar would be obvious in the teriyaki sauce ("It's almost always too, too sweet anyway"), we were surprised at how restrained the sauce actually is. Yes, there's some sweetness, but there's room for ginger and soy sauce notes as well as a lingering afterburn from red chili paste. "Another surprisingly good sauce, who'd have thought?" remarked a panelist.

While we encountered a gristly piece or two, the majority of the beef is simply sliced much too thin for gristle, although it does have a nice beef flavor. It's a "pretty plate," colorful with thickly julienned orange carrots (crunchy) and bits of bright green broccoli (mostly stem but some florets). As is so often the case, brown rice would have increased the fiber as well as the flavor in this dish - the white rice here resembles nothing so much as Minute Rice: each grain is absolutely distinct with no stickiness whatsoever.

That said, while the panel wasn't quite as gung ho about this dish as it was on the Grilled Chicken Marinara, the Beef Teriyaki also got a thumbs up for its "restrained, yet judiciously spicy" sauce. Perhaps this means more improvements down the road for Healthy Choice