evol Foods has a good track record with its Southwestern-style foods, especially their burritos. Their other foods... not so much.

So when I spotted today's Cilantro Lime Chicken Burrito, I was at the same time pleased - because it's new to us - and hesitant - but not so hesitant that I didn't bring it in for testing. I checked the other evol burritos on the shelf and noted that the Shredded Beef burrito, that we reviewed a little over two years ago, now has fewer calories - but more sodium.

I pointed this out to our panel, and one participant said, "That's never good."

As with all of evol's burritos, the cooking is simply placing the unwrapped, uncovered burrito on a plate, and cooking for one minute on a side. At first we thought the Cilantro Lime Chicken burrito (320 calories, 310 milligrams sodium, 4g fiber) had escaped splitting down the side, but we flipped it over again to find this wasn't the case. 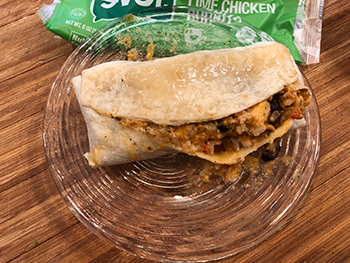 It's too bad, because our panel called this "a great little burrito." The flour tortilla is soft and just a little chewy. There's plenty of filling, and what a filling it is: the clearest flavors are of cheese, lime, and cilantro with a savory chicken undertone punctuated by sweet corn kernels. White rice and black beans round it out and there's just enough of a spicy zing to keep things interesting.

This means we had a bit of a dilemma: generally we don't like to give a thumbs up to burritos that split when cooked. First of all, "that sort of defeats the purpose of a burrito," as a panelist pointed out. And second, we've had plenty of burritos that didn't split and were just as good. We'll give this a hesitant thumbs up because the flavor and the numbers are so good. Cook carefully.

Speaking of burritos that don't split....

"That's odd," said a panelist. "Why would you take out calories and add salt?"

The answer, of course, is that it changes the ratio of sodium to calories, from 0.65 for the old version to .96 for the new version. Essentially, it's saltier. 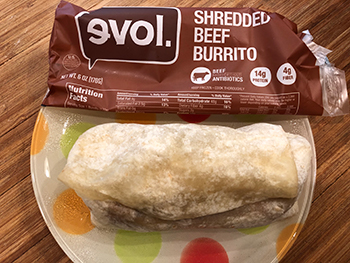 This burrito didn't split in cooking. It's the same, slightly chewy flour tortilla. The most assertive flavors in the filling are of cheese and beef - which is appropriate as beef appears first in the ingredient list. There's also white rice (overcooked; no surprise) and pinto beans.

At less than 310 milligrams of sodium, it certainly doesn't taste salty, but that does give us a hint as to why they upped the sodium: it's actually pretty bland. Sure, it tastes of cheese and beef, but "this burrito is NOT spicy," said our panelists. There's a hint of lime, and the corn kernels are crunchy and add little pops of sweetness, but the overall impression is "a tortilla with beef and cheese."

Should we give it a thumbs up or a thumbs down? Our panel felt that there were too many other options that tasted better. Sorry, evol.