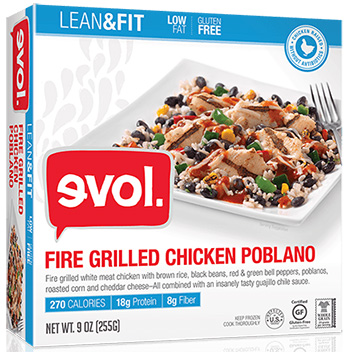 If you follow this Friday column regularly you might know that in the early days we were fans of evol. Their original burritos and early attempts at frozen meals were quite good. They expanded and then were purchased by a larger company and it has been hit or miss since then.

It is a bit like that friend you had in grammar school who goes bad. You still like her but she does a lot of things that just don't make sense sometimes. As such, when we see a new product by evol we think to ourselves, "Oh I really like evol, what kind of trouble is she up to now?"

Their Lean & Fit: Fire Grilled Chicken Poblano we thought was a misnomer before even taking it out of the freezer case. As big as she is, evol is too large to fire grill anything now. Maybe back in her grammar school days, but not now. Not a chance. And before even cooking the meal for the suggested 3:45 in the microwave you can see that it contains just small chunks of chicken. Nothing "fire" or "grilled" about that, evol. There you go, bending the truth again just like you did when our second grade teacher asked who taped her paperweight to the desk.

The other thing you notice is that the meal is full of black beans, red and green peppers, and brown rice. Encouraging. Sadly, our old friend lets us down again. None of that fiery goodness of the evol we used to know and love. What this dish amounts to is some brown minute rice, red peppers, green peppers, corn, black beans, and bits of chicken topped with red salsa. It's good. It's pretty tasty, if pretty ordinary. In the end it's just... meh. There's just not much there.

The numbers are good at 270 calories, a modest 350 milligrams of sodium and a whopping 8 grams of fiber. It was, however, $3.79 for a single serving. For the price of four of these we could have purchased a bag of frozen corn, two cans of no salt added black beans, two peppers, some brown minute rice, salsa, and chicken, with money left over. Toss all of that together and top with the salsa (which is where all of the sodium comes from) and you have this dish.

Really. That is all this is. There is nothing here. No creativity. No finesse. No technique. Just a bunch of ingredients tossed in a bowl and sent to the freezer case. And you would have twice the serving size for the same price while still coming in under 500 calories and less than 500 milligrams of sodium. 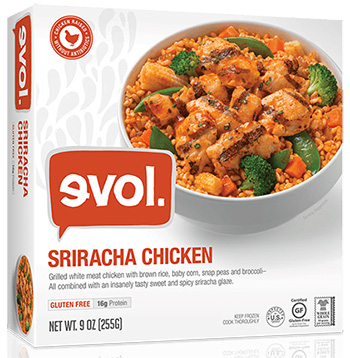 This technique is obviously repeated with their Sriracha Chicken. Same rice, same chicken bits, but the corn is bits of pickled baby corn, the vegetable is broccoli, and the legumes are cut up snap pea pods all topped with sriracha sauce. The calories are similar but the fiber is only 4 grams and the sodium a whopping 640 milligrams.

This one might cost you a bit more to produce because the pickled baby corn are the pricy ingredient, but again, all this dish consists of is a bunch of ingredients tossed in a dish with some sauce, covered with plastic, and sent to the blast freezer. You can do that at home just as cheaply, just as easily, and the serving size will be twice as much food.

I think that what has happened here is that evol has entered her lazy college years. Being from Colorado maybe she is a bit stoned now, which has just made her that much more unpredictable. This is, after all, the type of food a stoner college freshman would make. However, we will go on liking evol because she was once so cool, but I do fear for her ability to succeed moving forward in life. Hopefully she will finally grow up and reach the potential everyone said she had in elementary school.