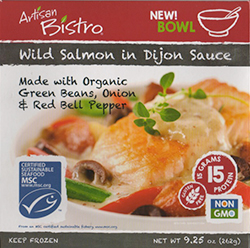 After the dismal results from our last foray into The Artisan Bistro, we weren't exactly looking forward to another set of meals from them. The meals we reviewed a month ago had good sides... but you don't eat just the sides. Still, there's just not a lot of fish options in the frozen meal aisle, so we could hardly ignore two new varieties.

The instructions on the Wild Salmon with Dijon Sauce tell us to cook the meal on "medium-high" for 3 minutes, then another 1 minute on "high," and then allow the meal to sit for 1-2 minutes before serving. We figured that "medium-high" in our microwave was probably equivalent to 70% power and "high" to 100% power and cooked accordingly, only to find that the salmon was still frozen in the middle. Only another two minutes on 100% power in our 1200 watt machine cooked the salmon enough to eat, and it was still pink in the center. Strike one for The Artisan Bistro.

Strike two was the the fish. Unfortunately, the salmon suffered from the same problem that many frozen and reheated fish have: a watery flavor and a texture as if the fish had been turned into a sponge during the freezing process. Worse yet, we found a bone. Another fish to put people off fish.

What's sad is that this could be really good: the green beans and red bell pepper have good flavor and the beans are still crunchy. The potatoes are really well cooked and the sauce is really tasty. Double the vegetables and potatoes and top this with the Dijon sauce and an ounce of low-fat cheddar cheese, and not only does it taste better, it's cheaper to produce: fish is, after all, fairly expensive. 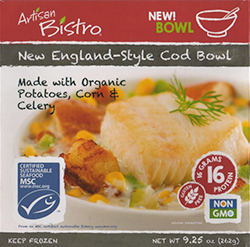 We were a little surprised to find that a "New England-Style Cod Bowl" is apparently a soup: this is essentially corn chowder topped with a filet of cod. On the one hand, we had no problems with the cooking instructions and the cod itself wasn't bad at all: put it in the salmon dish and you would have something.

But the soup. The chowder we found to be way too salty, "in an offensively bouillon-cube-ish way," said one taster.

That shouldn't be surprising, however: a look at the package showed us that this has only 180 total calories and 600 milligrams of sodium. That's a record salt-to-calorie ratio of over 3 to 1! Two more disappointments from The Artisan Bistro. It will likely be a while before we test their products again.