We started our tasting session with the Sausage Breakfast Sandwich, then moved on to the Chicken Maple Sausage Breakfast Sandwich. While the two might have slightly different nutrition information, have different types of sausage, and the Chicken Maple version uses egg whites instead of whole eggs for its egg patty, as far as the tasting panel was concerned they were the same.

First of all, the egg patty is tough and rubbery. For some reason the egg white version was slightly less rubbery than the whole egg version. But it doesn't matter because "my teeth are practically bouncing off this thing."

Second, we know there's cheese in these sandwiches because it says so on the box and we saw the tiny square of cheese when we put these sandwiches into the microwave. You can't taste it, though. 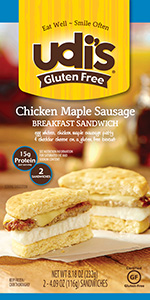 Third, the sausage patties (both kinds) are more scented than flavored, and are only about 5 millimeters thick. The Chicken Maple Sausage came out of the microwave looking like freezer-burned beef: wrinkled and grey. One taster wondered aloud why biting into the Chicken Maple version made her think of dog food.

Fourth and finally, both products' packaging describes these sandwiches as being "on a gluten free biscuit." Gluten free it might be, but it's not a biscuit. I'm well aware that it's quite difficult to make good biscuits with non-wheat flour, but Udi's didn't even try to make this bread-like-substance look like a biscuit. Early last year we reviewed breakfast sandwiches from evol Foods, and the "bread" for Udi's sandwiches appears nearly identical to the flatbread used in evol's: "more like biting into a stale and slightly softened thick cracker than anything breadlike."

The overall impression of these sandwiches is that they're dry: they're breakfast sandwiches devoid of all joy or savor, having more in common with the plastic, toy foods made by Fisher Price for their kitchen playsets than with real food. Even after cooking the sandwiches can easily be separated into their discrete parts (except for the cheese, which becomes a nearly microscopic layer of white goo.) This pseudo-food is why people with true celiac disease can't understand those who choose to avoid wheat because it's the latest dietary fad: nobody would willingly eat like this. Nobody.