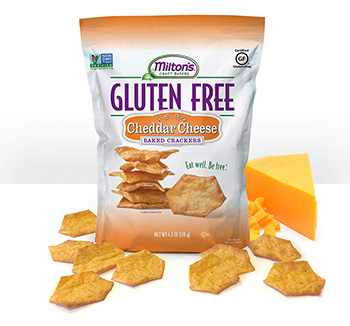 Crackers. They are almost an essential part of our lives. We have them at cocktail parties, for snacks, and with soup. We all have our favorites.

In truth, they're not really all that great for us. Most crackers on the market are made with white flour and salt. That's mostly it. No fiber, not much in the way of nutrients, and often with a lot of (a lot of) weird chemicals.

But we eat them. Now imagine you are all of the sudden asked to eat gluten free. Your favorite cracker is likely not available. And the ones that you do get might be even worse for you than the crackers made with white flour, and with even less fiber. So this week we roundup some gluten free cracker choices.

Milton's Craft Bakers was first up with their Cheddar Cheese variety. These are listed as "baked crackers" and 14 of them are 130 calories (about ten calories each: makes it easy to keep up with how many you are eating). As I predicted, there is only a single gram of fiber and 280 milligrams of sodium (more easy math: 20 milligrams per cracker). These are light and puffed and crunchy. They don't have very much cheddar flavor, however, and are about as salty as a cracker gets. Not bad, but not great. 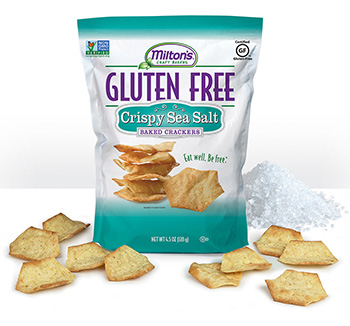 Their Crispy Sea Salt version is much better (the nutrition facts are almost identical). They do taste of salt, but are not as salty tasting as the Baked Cheddar, and the rest of the cracker is crisp with a great creamy flavor. These would make a great vehicle for almost anything you want to dip. They have sort of a pita flavor and would be great with hummus, for example. 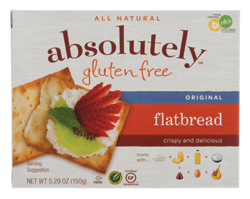 Next up was a company called Absolutely and two of their flatbreads: one their Original version and one labeled "Everything." As crackers go, flatbreads are great and make up the perfect vehicle, especially for cheese or spreads like tapenade. These are just that: a vehicle. The original is about as flatbread as flatbread gets. Bland with a crunchy texture that turns a bit chewy. Not very salty, either, with only 65 milligrams of sodium in two crackers, about 55 calories, and a pathetic 0.3 grams of fiber. 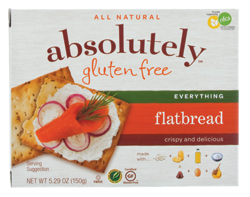 Their Everything version is not much more - the same cracker but with a bit of flavor of caraway seed (not everything by a long shot).

By far the best of today's roundup are a company called Edward & Sons and their Cuit au Four Brown Rice Snaps. The numbers on this are pretty good, with 8 crackers having 70 milligrams of sodium, 60 calories, and a gram of fiber. In spite of the low amounts of sodium, the Black Sesame version is both salty tasting and has a GREAT umami flavor. The crackers are crisp and light. The bad part of these is deciding whether they are better than the Cheddar crackers. These are certainly better than the Milton's version of cheddar crackers. They are salty and cheesey and pretty much everything you would want in a cracker.

Any of these are good crackers. All of them could pass for not being gluten free, which is saying something because in the past gluten free meant they would have just tasted bad. Of the three brands, however, only the Cuit au Four are really good.

Read all our reviews of gluten-free frozen foods, breads, and other products »