As I said last week, frozen meals are really tough to do well: they're essentially leftovers. Seafood frozen meals are doubly difficult, as it's hard enough for most chefs to cook seafood correctly without freezing the meal and reheating it. Too often the veggies are overdone and mushy, the starch is overcooked (and mushy), and the seafood is either rubbery or... mushy.

I've given Lean Cuisine a hard time in the past, but I am here to say that sometimes they do get it right. 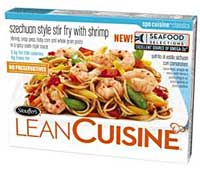 The first meal I tested this week was their Szechuan Style Stir Fry with Shrimp. I wasn't very optimistic; after all, the last shrimp meal I had from them, the Shrimp Alfredo, was pretty terrible. The shrimp were fine but the Alfredo sauce left a lot to be desired. I will admit that this week's dish didn't promise much before going into the microwave: as with the Shrimp Alfredo, the shrimp were uncooked, but the thin spaghetti-like pasta I figured would be a problem.

I do love the smell of garlic, and that's what this meal smells like while cooking. I was careful to follow the instructions on the box (be careful not to overcook these) and I have to admit, once I pulled off the plastic cover and mixed the pasta, veggies and shrimp together it smelled really good. And you know? It tasted pretty darn good, too! On the down side, the pasta was a little overdone (as I expected) and the snap peas lacked snap, but the peppers, carrots and baby corn were well cooked and added a nice crunch. The sauce has just a little bit of kick (our readers with GERD / Acid Reflux will want to avoid this one) and the shrimp were just right.

The problem we had with the Shrimp Alfredo was that the sauce ended up watery because of the water frozen in the shrimp. In this dish it didn't much matter as the sauce wasn't supposed to be thick and creamy. The only real negative on this meal is the amount of sodium, at 680 milligrams. That's nearly 30% of your recommended daily intake, so of you do have this one for lunch, be careful with sodium for your other meals that day. 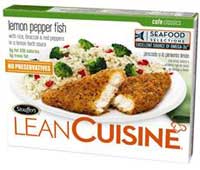 I reviewed two of Lean Cuisine's fish meals a couple of months ago, and they were awful. Flavorless. So I was not very optimistic about their Lemon Pepper Fish. Was I wrong!

The breading actually has a nice lemon pepper flavor and the texture of the breading actually reminds me of the texture of Kentucky Fried Chicken's Original Recipe that I had as a kid. An even bigger surprise was the rice and broccoli side dish. The rice were well cooked and the broccoli was cooked perfectly - still crunchy. The sauce actually had a good, subtle lemon parmesan flavor, as well. With the sodium on this one coming in at a comparably low 590 milligrams, this one gets two thumbs up. Well done, Lean Cuisine! Keep this one in the fridge.