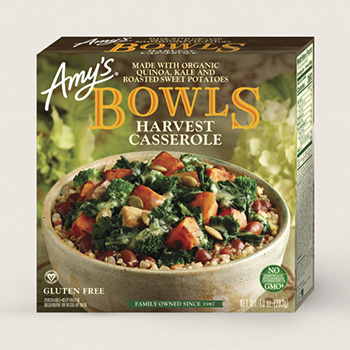 Our local Whole Foods carries a pretty wide selection of Amy's frozen meals, but unfortunately we've reviewed so many from Amy's (over 80 items reviewed at last count) that it's unusual for us to find something new on their shelves. Their Harvest Casserole caught my eye because of the big chunks of orange sweet potato contrasting with the overall green tone of the packaging. I looked around for something else to review and found their Brown Rice, Black-eyed Peas and Veggies Bowl that we reviewed back in 2009 (wow, that's a long time).

Both "Bowls" cook the same way, microwaving for about 4 minutes in their slit overwrap, then allowed to sit for one minute.

The Harvest Casserole Bowl (320 calories, 650 milligrams sodium, 7 grams fiber) has the aforementioned big chunks of sweet potato on a thin bed of sliced kale and chard. There are just a couple of small broccoli florets, and a little pile of small red kidney beans at one edge of the bowl, as if a spoonful was dropped there just before freezing.

Stirring the bowl's contents together brings up pieces of tofu about 3/4 of an inch square and about an eigth of an inch thick and distributes the cooked and partially mashed red beans through the bowl, helping to thicken the meal. Unfortunately, that also gives the meal an almost uniformly pinkish-brown color reminiscent of, well, you can guess. Appearance aside, the flavors and textures are almost all good: the rice is nicely firm, with a nutty flavor and almost crunchy texture boosted by the quinoa. The sweet potato isn't overcooked either but does add a slight sweetness that contrasts nicely with the bitterness of the kale and chard. We assumed that the tofu had been sauteed, perhaps, in sesame oil, as it alone had a sesame flavor. Sunflower seeds and pumpkin seeds add crunch.

The panel struggled a little in defining the bowl's flavor profile. Miso appears in the ingredients, so we expected a somewhat more Asian flavor profile, but the sweetness of the sweet potatoes and the savor of the red beans and greens combine to make it "more smokey and savory." Overall, the panel enjoyed it, but they note that "not everybody's going to like this one," as it's "more on the vegan-y side of vegetarian." 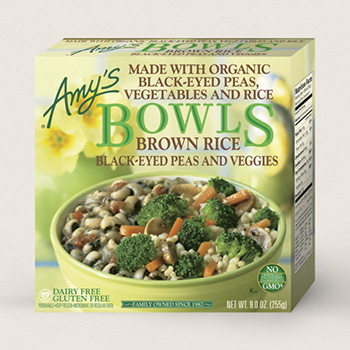 The Brown Rice, Black-eyed Peas and Veggies Bowl (300 calories, 580 mg sodium, 8g fiber) seemed more promising at the start but ended more disappointing. Before putting the meal in the microwave, we counted the number of broccoli florets at 8 and estimated the amount of julienned carrots to be about a tablespoon or so, always bearing in mind that there could be more hiding under the surface.

Nope. After stirring this dish resembles nothing so much as "soupy oatmeal with vegetables," which conveys almost everything you need to know about it. Amy's describes it as having "a tasty ginger sauce," but we could only detect the aroma of ginger, not the flavor - and could only smell it if we held our noses quite close to the dish. In stirring we noted some small slices of "limp brownness," which we figured out from reading the ingredients were slices of mushroom. It's too bad there were only a few - they could have added more flavor to the dish.

Which is not to say that the dish lacks flavor: black-eyed peas do have their own flavor, which comes through nicely in this dish, buoyed by the nuttiness of the brown rice. But that's about all it has going for it. The broccoli and carrrots give it texture, but it's really just a bowl of black-eyes and rice. If you like that: great. We'll give it a thumbs down because Amy's can do better (and not just with the Harvest Casserole).