There is something about Mac & Cheese from a box that I just don't understand. While it is so easy to make your own - better, cheaper and tastier - there are dozens of versions of ready to fix Mac & Cheese on the grocery shelves. We have reviewed a number of them and, generally speaking, they are not so great. 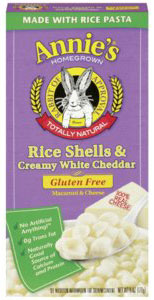 There is no reason to think that the gluten free versions that are now available are any better, but it is worth a try to see if they at least are palatable. I was doubtful with the Annie's Rice Shells and Creamy White Cheddar because our experience with rice pasta isn't very good. It has a tendency to come apart when boiled and be gummy.

This wasn't the case with the Annie's shells. They held up well and had a good texture.

The powder that comes in the box looks pretty much like every other version of Mac & Cheese except that it is white. This is combined with milk and then the cooked and drained pasta is added. Simple. If you close your eyes, this tastes pretty much like Kraft Mac & Cheese. A bit too salty and a bit too chemical and not all that much like cheese. It does seem strange that it has a manufactured flavor when all the ingredients are natural.

The numbers aren't all that great with a serving containing 330 calories and 490 mg of sodium. Not terrible but not great especially given that there is only 2 grams of fiber per serving.

I had high hopes for the Ancient Harvest Supergrain Quinoa Mac & Cheese. Quinoa pastas are by far the better when it comes to gluten free options so I was hoping for a good texture even if there were the doubts about the cheese part of the Mac & Cheese.

The pasta is good and uses their corn and quinoa flour blend giving the dish a very cornmeal flavor. That might be fine for other dishes but your kids could take some time to get used to it. The cheese is bright orange like mainstream Mac & Cheese but without the in-your-face chemical flavor. It is mild and not too salty and the best of any boxed Mac & Cheese we have tasted.

There is some monkey business with the Nutrition Facts, however. It claims to serve three but realistically serves two (which would allow head to head comparison with the Annie's). Using those numbers it comes in at 350 calories and 614 mg of sodium. There is, however, 6 grams of fiber and the serving size looks larger - likely due to the difference in calorie density of the pasta.

Both of these are far better than Kraft Mac & Cheese products, if for no other reason than the lack of strange chemicals. They both taste better and have fewer calories and sodium and more fiber. The best choice is the Ancient Harvest and even those who aren't gluten sensitive would like this one.