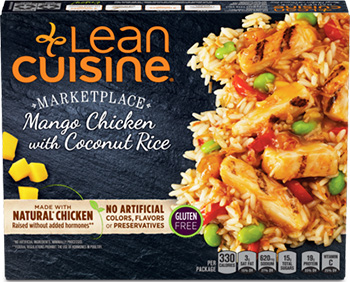 It was the yellow stripe - "Limited Edition," it read - on the box of today's meals that drew my eye. It seems odd to me that a frozen food company would do limited editions of their food - if it sold well, wouldn't you want to keep selling it? - but I'm not in the frozen food business.

The first meal we tasted was the gluten-free Mango Chicken with Coconut Rice (330 calories, 620 milligrams sodium, 2g fiber). According to the back of the box, this dish was inspired by the city of San Francisco, leading one of our panelists to quip, "Who knew San Francisco tasted like mango chicken?"

There are a good half-dozen good-sized chunks of chicken in this dish, which is dotted with bright green edamame (soybeans) and strips of red bell pepper. Oddly enough, we couldn't actually spot any chunks of mango, but we could see the advertised bits of toasted coconut, which may be why one panelist felt that it "smells like an almond croissant."

I was concerned that it might be overly sweet - it's easy to go overboard when you have both mango and mango juice in the dish - but it's not: it's confused. The flavor starts out just a little sweet, with a sticky texture from the mango juice and an undertone of coconut, then there's a kick of heat from the red pepper flakes in the sauce. "It's pretty spicy for Lean Cuisine," said another panelist.

The chicken is reasonably tender (it's touted as "natural," which as of this writing has no legal meaning according to the FDA), the white rice is quite well cooked (for frozen white rice), and the soybeans are firm enough to lend the whole some needed texture - one panelist described the dish as "gloppy." Yet the overwhelming feeling of the panel was that "It's not offensive... but I wouldn't come back to it."

It's probably a good thing the Mango Chicken dish is a limited edition. That's not the case for the Roasted Garlic White Bean Alfredo, however (330 calories, 620mg sodium, 10g fiber). 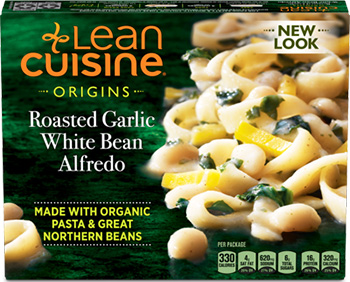 This dish has the mouthwatering aroma of roasted garlic, and the sauce's flavor lives up to the scent, adding the smooth, creamy, cheesey savor of a well-executed Alfredo sauce. Unlike far too many other Alfredo sauces we've seen in frozen meals, this sauce is "plenty thick enough" to stick to the pasta, which is only a little overdone.

Lean Cuisine mixed in spinach and julienned yellow peppers, making it a colorful dish. The bitterness of the spinach cuts through the cheesey Alfredo sauce nicely, and the yellow peppers add a spot of crunch. The white beans are firm, "almost meaty," and someone thoughtful at Lean Cuisine added a hint of nutmeg and enough black pepper to give the dish a bit of zing. Overall, "pretty darn tasty, and with 10 grams of fiber!"

We gave the Roasted Garlic White Bean Alfredo two thumbs up: stock up while you have the chance.

Read all reviews of meals from Lean Cuisine - over 80 of them! »