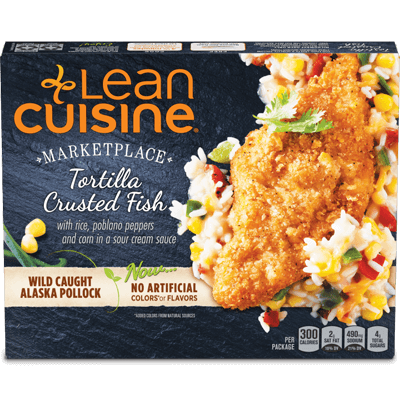 We're always on the lookout for convenience meals that include seafood. People tell me that they're afraid to cook fish or shellfish at home, and I can't blame them: poorly-cooked seafood is tough, chewy, and flavorless when its flavor isn't off-puttingly strong, and it isn't cheap, either: why buy something that your family won't eat?

This isn't even new: my wife didn't eat seafood regularly as a child and her exposure to seafood, like a lot of people, was limited to those awful overly-processed and indifferently-breaded fish sticks that, to be honest, still aren't unusual today.

Back in 2009 we first reviewed Lean Cuisine's Tortilla Crusted Fish, and although it was a cat-pleaser (that cat has since gone on to the Rainbow Bridge), it didn't please our tasters.

After ten years we hoped that the Tortilla Crusted Fish (310 calories, 480mg sodium, 2g fiber) might be a bit better, and our hopes were (surprisingly) borne out: 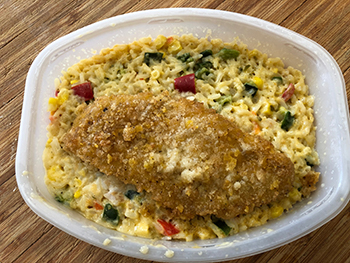 The fish in this dish is billed as Alaskan Pollock. I'm not qualified to assess the DNA of the fish, but it is a whitefish that's a little over half an inch in thickness, is surprisingly NOT overcooked, and is breaded with what is billed in the ingredients list as corn-based tortilla chips. I have my doubts as to whether the breading on this fish was ever actually in the shape of tortilla chips, but the coating does have a nice cornmeal flavor.

That breading isn't crunchy in the least, however, and that's a theme that's borne out throughout both meals. The white rice that accompanies the dish is overcooked to softness and sauced with sour cream and cheese, along with diced red bell pepper, poblanos, and corn. The corn and bell pepper punctuate the creamy umami of the rice with sharp sweetness, giving it some much-needed texture and a gentle spice.

While we would prefer that the tortilla-chip breading were crunchier, we can't overlook that the fish is not overcooked (fairly flavorful, actually), and comes with a moderately tasty side. We'll give this one a thumbs up. 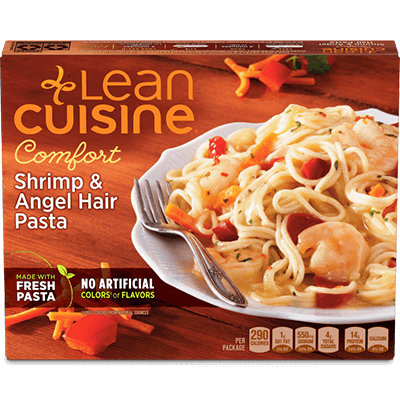 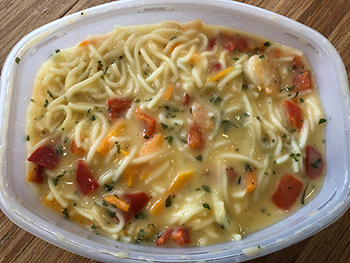 It's pretty easy to tell why the sodium is lower now: there's no added salt in this dish. No, salt does not appear in the ingredients list at all. There's shrimp and parmesan cheese, both of which have a fair amount of sodium on their own, but not added salt. There is, however, potassium chloride, a common salt substitute.

We could smell the potassium chloride when we took the dish out of the microwave to stir, about halfway through the cooking process. We expected that the scent of potassium chloride would taint the flavor, as well, but to our surprise it doesn't. Really.

As in 2012, this is still a bowl of tremendously overcooked spaghetti (this is by no means angel hair pasta) in a subtle cream and parmesan sauce. Yet the diced bell peppers add a jolt of sweetness and the julienned carrots still have a bit of crunch. Sure, there are only 5 whole shrimp the size of quarters, plus 2 small pieces of shrimp, but those shrimp aren't overcooked - they're actually pretty tasty for frozen shrimp (and that's saying a lot in New Orleans, where it's hard to find bad shrimp).

As the dish sits it does thicken, and although it does stay "a bit too gooey" for our tastes, we're inclined to give this one a thumbs-up as well for being a tasty dish that actually includes shellfish. Perhaps if we had more fish and shellfish options, our standards would be higher.