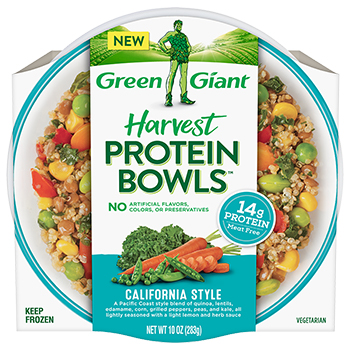 Back in March of this year we discovered that Green Giant, that most-venerable of vegetable companies, had entered the frozen food market. They are called "Harvest Protein Bowls," so in my view they are direct competitors to the "Power Bowls" from Healthy Choice. Both lines tout their protein content on their packaging, I would guess to appeal to those who are following "Paleo" or other "low-carb" diets. The Power Bowls from Healthy Choice are more miss than hit, but the two Green Giant bowls we tested, based on whole grains and a far more vegetables than the Healthy Choice versions, were excellent.

We started our tasting session with the California Style Bowl (290 calories, 540 mg sodium, 9g fiber). My wife, a native Californian, is always bemused by the idea of "California style" anything: she argues that it implies that there is a single "California cuisine" that is as stereotypical as "Japanese cuisine" or "Indian cuisine." In all three cases, she says, there's far more variety to the regional cuisines than the stereotype.

The "California Style" seems to say that California cuisine is somehow Asian, as it includes soybeans (edamame). But then, perhaps "California Style" also means "French"? International, maybe? This bowl has a base of quinoa and brown lentils (the lentils are what made me think "French"), and a rather dazzling variety of vegetables, including discs of carrots, diced red bell pepper, corn, peas, bits of kale, and broccoli. (Perhaps the kale makes it Californian?)

Unfortunately, most of the broccoli was in the form of two big, inedible chunks of stems: 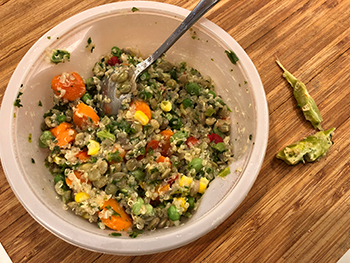 That aside, the lentils are savory and firm and the edamame are almost crunchy, giving the bowl a nice bit of texture. The discs of carrot are cooked enough to be soft but still sweet and the whole is tossed in just a touch of a sour-cream-based sauce with a light scent of dill. It's quite tasty but allows the flavor of the vegetables to come through nicely. As one panelist put it, "A big bowl of quinoa and veg with dill sauce. What's not to love?" We gave it a thumbs up, reasoning that the stems are unlikely to be standard issue. 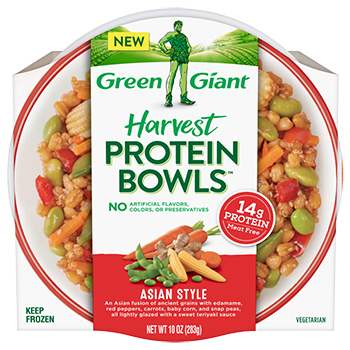 Granted, it says right there on the label that it's "an Asian fusion of ancient grains," but the panel and I still couldn't figure out how wheatberries are Asian. Why not use brown rice? We reasoned that Green Giant must have decided to use wheatberries because they have a great deal more fiber than brown rice: about 6 grams of fiber per 1/4 cup uncooked, as opposed to just about 2 grams in the same amount of uncooked brown rice. Similarly, wheatberries are much higher in protein: 6 grams in the wheatberries as opposed to 3.5 in the rice. "They're 'protein bowls,' after all," pointed out a panelist. 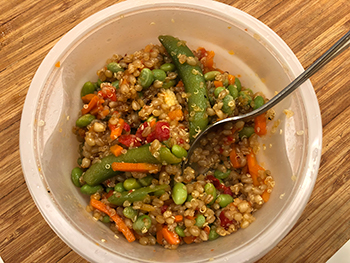 On the other hand, the panel agreed that edamame, snap peas, and baby corn said "Asian," as does its very subtle scent of ginger, garlic, and soy sauce.

Both of the snap peas (well, two-and-a-half) are still crisp and sweet, and the almost-crunch edamame and chewy wheatberries give the dish great texture. But the baby corn is cut in such large chunks - all about an inch long - that each piece is really a mouthful by themselves. That's no way to incorporate an ingredient into a dish.

We found the Asian Bowl disappointing when compared with the Southwest Style, the Italian Style, or even the California Style: smaller pieces of baby corn and more snap peas along with a little bolder flavor in the sauce would make this a much better dish despite the cognitive dissonance of the wheatberries. Leave this one on the shelf and grab one of the other three varieties.