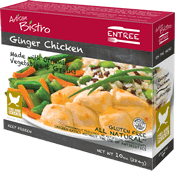 Of the sixteen meals we've reviewed from Artisan Bistro, we've given thumbs up to only five. Just one in three? That actually surprised me when I looked at the list of meals we've reviewed from them. The company prides itself on its organic, gluten-free, and sustainably sourced ingredients and tends to have pretty reasonable sodium levels; maybe that's why I have them mentally pegged as one of the better frozen food companies. Just goes to show that better ingredients - and a higher price at around $4.50 each - doesn't necessarily mean better-tasting food.

And that is, after all, what our food reviews are about: what tastes good and is better for you.

Today's tasting session started with the Ginger Chicken, and after five minutes in the oven we could definitely smell the ginger in the sauce. A good sign, we thought.

This meal is served with a side of green beans, snap beans, and julienned carrots, all of which are nicely crunchy and have good flavor. There's a gentle green tea note that the group really liked. The rice pilaf is also good, with plenty of texture from the not-overcooked white and red rice as well as the sliced almonds. Good sides, both of them.

The chicken is also fairly good, being relatively moist. Where this meal fails is the sauce. Despite the ginger scent, there's no ginger flavor in the sauce whatsoever. In fact, the orange flavor is nearly overwhelming. This is like pouring thickened, sweetened orange juice on your food. Too bad: the sides were good, but you don't eat only the sides. Leave it in the freezer case. 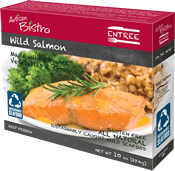 It's been a while since we've had a frozen meal with fish in it. Artisan Bistro's Alaskan Salmon Cake is really good, as was their Sesame Ginger Wild Salmon, so we were expecting rather better things with this meal, especially at only 135 milligrams of sodium in the dish (wow!).

Unfortunately, we were disappointed. The broccoli florets steam just about perfectly, although they are left utterly plain: no butter on them or salt or anything. Despite being underneath the filet of salmon, the pilaf (basically identical to that in the Ginger Chicken but with dried cranberries and walnuts) was dry, dry, dry. And the same was true of the salmon itself: utterly overcooked despite our setting the cooking time in the middle of the recommended 4 1/2 to 6 minutes. "This is the salmon that makes people hate salmon," remarked one taster. And the sauce? More orange flavor, no detectable rosemary flavor or scent, and so far as we could tell there might have been an entire teaspoon of the stuff. Artisan Bistro's track record with us is getting closer to 1 in 4.