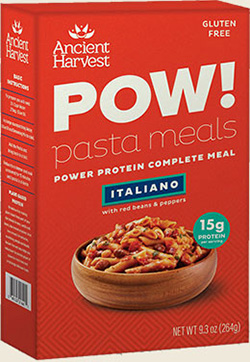 We have reviewed a number of pasta meals through the years and it has been mostly disappointing. The majority of boxed pasta dishes have been of the Mac & Cheese variety, both wheat based macaroni and gluten free versions.

I noticed POW Pasta Meals on the shelf because of the name and bold packaging but the Ancient Harvest logo is really what caught my eye. We have had good luck with their gluten free pastas - especially their quinoa based products which come with a very nice 4 grams of fiber per serving, great flavor, and good texture.

The POW packaging has the tag line of "POWER PROTEIN COMPLETE MEAL" with the claim of 15 grams of protein per serving of the Italiano Red Lentil Penne. More intriguing were the instructions. These call for putting 2 1/2 cups of water in a pan with 2 tablespoons of olive oil and the seasoning packet over high heat. When the water boils, they direct you to add the pasta and reduce the heat to a simmer for 15 minutes. The pot is to remain uncovered, but there are no instructions about stirring. That's it: water, oil, packet, boil, pasta, simmer.

I was dubious, because gluten free pastas generally give off a lot of particulate matter in the water when they are cooked conventionally. It seemed that the pasta dish would come out too thick and gummy. As I simmered the pasta it became clear early on that 2 1/2 cups of water was not going to be enough, even though I adjusted the heat to very low to keep the water from evaporating too quickly. In the end I added an additional 1 cup of water in 1/3 cup batches and did stir the pasta to keep it from sticking to the bottom of the pan. 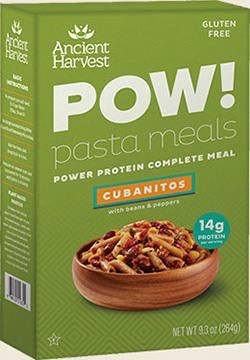 As it neared being done, the pasta did look a bit gummy - or maybe it was creamy. Hard to tell during the cooking, but when the pasta was done to al dente I stopped.

Pow. This is pretty good. The red lentil and quinoa pasta is spot on. Not gummy, with a good bite and great whole grain flavors. The sauce tastes a bit like it came out of a box, but of course, it did. It was heavy on the dried oregano and basil, sort of like the flavor in the tomato sauce that tops a good slice of New Jersey pizza. Not bad but not sophisticated. Familiar. There is a bit of an astringent aftertaste, but that is because we tasted this without anything to balance the dish like fish or vegetables.

The numbers on this are pretty good. The box contains four servings (true servings at 2 ounces of pasta per portion) and each comes in at 290 calories as prepared. Couple that with only 490 milligrams of sodium and 5 grams of fiber and you have a pretty good side dish to serve with some simply prepared fish and veggies. You might be able to add some veggies to the pan at the beginning - broccoli, carrots or mushrooms maybe - along with a bit of chicken for a one pot meal. There is more than enough sauce to do that.

The Cubanitos Green Lentil Penne version is not as good. In fact, it is hard to believe that it came from the same R&D lab. Note that it also took the same extra cup of water to make and the aromas were promising, but the meal is wrong in almost every way. Tasters had a bit of trouble putting a finger on exactly what is wrong and one said "it might just be everything except the pasta." There is too much cumin and that balances poorly with the red pepper flavor. The best description was "it tastes like day old taco filling and not in a good way - like Taco Bell." The aftertaste was very astringent - the result of too, too much cumin.

Good pasta in both cases, but one good meal and one bad. Cost is an issue, of course, with each serving coming in at $1.50. Not outrageous, but probably more than if you made your own pasta.