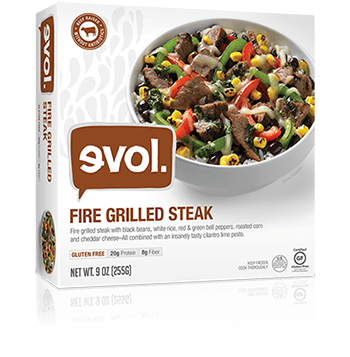 We discovered evol Foods back in 2011, and we were pretty impressed by their no-Latin ingredient list and reasonable amounts of sodium. Alas, as we've mentioned (harped on, really), they branched out from Mexican food and some of their meals have been truly ill-advised.

We returned to their roots last month with a review of two burritos, Bean, Rice & Cheddar Cheese Burrito and Shredded Beef Burrito, and found that yes, when they stick to their roots they do well. At that tasting one of our panelists asked about the first items we had reviewed from evol: wouldn't it make sense to revisit them?

The Fire Grilled Steak was up first. Back in 2011 this came with 420 calories, 540 milligrams of sodium, and 8 grams of fiber. The numbers on today's version are only a little different, at 400, 520, and 8 respectively - certainly a reasonable change in 6+ years, and if it were new to us today, we'd still be impressed. On the other hand, the compostable bowls have disappeared in favor of recyclable plastic bowls. They're probably cheaper from a manufacturing standpoint, but from an environmental standpoint we were disappointed.

Our testing microwave is a little more powerful than most, so we reduced the recommended cooking time from 3:30 to 3 minutes, allowed it to stand for 1 minute in the microwave, and peeled back the plastic. The first impression is that this is a bowl of black beans and rice with some beef - "fire grilled steak" might have pride of place on the package, but it doesn't seem to in the bowl. The meat has the slightly stringy texture of flank steak and is fairly tender and flavorful, but the down side is that we did run across a couple bits of gristle. "Bits" is a good descriptor, too: the meat is in more of a small, thin dice than any sort of substantial pieces.

Similarly, only a couple of slices of green and red bell pepper were visible, contrary to the picture on the box. Still, the cilantro lime sauce has a savory, tart flavor, the black beans are firm but not crunchy, and the rice is cooked perfectly. While it might not be exactly as advertised, the panel felt that this is "a pretty good burrito in a bowl." 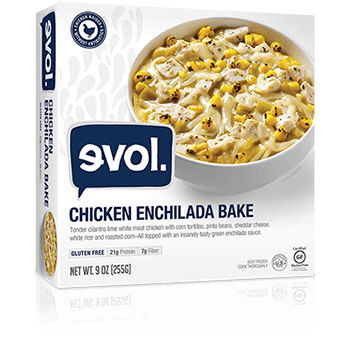 "There's no other way to describe it," said a panelist. "It looks like the dog's breakfast."

The Chicken Enchilada Bake comes out of the microwave a nearly smooth, yellow-green blob with a little skim of oil around the edges. The aroma isn't nearly as off-putting, however, with the scent of fresh corn tortillas dominating and a mouth-watering tomatillo and jack cheese note. It's relatively featureless because the whole is topped with a single corn tortilla, under which are pinto beans and white rice in a tasty cheesy sauce. Roasted corn kernels add a jolt of sweetness to cut through all that umami, along with a bit of crunch for badly-needed texture. The tortillas have an assertive corn flavor, but they soak up so much of the liquid that they're more like a layer of cornmeal mush than a tortilla.

But what about the chicken? We forgot there was supposed to be chicken in this dish, so we went hunting through the bean and rice filling to find it. It's no surprise that we missed it: most of the pieces are so small that they would be more accurately termed "bits" and not "pieces" (according to one sardonic panelist). When we fished out one of the larger "pieces" to taste more-or-less on its own, we found it rather dry, but nothing that isn't easily, even pleasantly hidden by a forkful that contains all of the meal's elements.

The first time we reviewed this dish it had 390 calories, 580 milligrams of sodium and 7 grams of fiber. Today it has 350 calories, 610 milligrams of sodium, and the same amount of fiber. The numbers might not be quite as good, but they're still respectable compared to some meals we've had, and the flavor is certainly better. These meals still get thumbs up, but with more reservations than the originals.