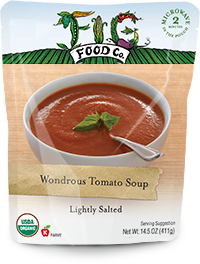 It's been over a year since we first encountered Fig Food's soups. These are some excellent soups that don't need to be refrigerated and come in their own microwaveable pouches. Like many soups, they are labeled as being two servings, but you and I both know this isn't very realistic: who ever eats half the can (or pouch, in this case) of soup?

But it doesn't matter because not only are these soups low in calories (anywhere from 80 to 260 calories per serving), they're also very low in sodium at 200 to 300 milligrams per serving. That's impressive when you compare these to frozen meals that can have upwards of 1,000 milligrams of sodium for a 400 or 500 calorie meal.

Today we have two classic soups to taste and started with what Fig Food calls "Wondrous Tomato Soup." (Wondrous? I've had meals that were wondrous, but they didn't have anything to do with a can at any point in their creation.)

Their tomato soup has a rich tomato scent that borders on a good, fresh pasta sauce, and indeed, the package suggests that you use it as a pasta sauce. Unlike some other tomato soups, this is not very sweet despite the two sweeteners in the ingredients list. In fact, it has a bright, tart tomato flavor. One panelist described it as "warm tomato juice," and indeed that's exactly what it tastes like: fresh, slightly underripe tomatoes. It's also extremely smooth in consistency, which only increases the similarity to tomato juice. 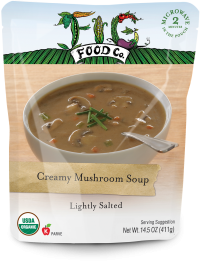 The panel was split on this soup. Some felt it lacked depth and wanted some spices, like basil or oregano. Others felt it wasn't creamy enough. My view is that single-ingredient soups, like tomato soup, or broccoli soup, or mushroom soup, should endeavor to showcase those single ingredients - whether or not you add other ingredients to enrich the soup. I'll give this soup a thumbs-up for its bright tomato flavor, but I wouldn't call it "wondrous."

I would add that this would indeed make a good base for a pasta sauce, or you could add two ounces of plain, cooked pasta and some vegetables to make it heartier. For the two servings in the package, the total is 160 calories, 400 milligrams of sodium, and 2 grams of fiber.

Their Creamy Mushroom Soup, on the other hand, was a unanimous hit. It has a deep, earthy scent of mushrooms that comes in a creamy base made with soy rather than milk (note for those who are lactose intolerant). Bits of carrot and mushroom give the soup a little texture, but what really made an impression is the flavor: this tastes almost exactly the way it smells - a rich, true mushroom flavor. There's no indication on the packaging what type of mushrooms they used in this soup, but more than one panelist said that it smelled like fresh crimini mushrooms. If you're going to buy mushroom soup to use as an ingredient, consider using this one - there's far less sodium and far more mushroom flavor. Two more positive reviews for Fig Food's soups. (Two servings total is 200 calories, 560 milligrams sodium, and 2 grams fiber.)