Salisbury Steak with Macaroni & Cheese and Meatloaf with Mashed Potatoes 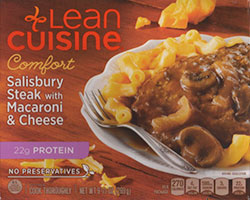 Once again we're reaching back into the Dr. Gourmet Food Reviews vaults to see if a meal we tested over a decade ago has changed. Back then we tested Lean Cuisine's Salisbury Steak with Macaroni & Cheese and their Meatloaf with Mashed Potatoes and both got a resounding thumbs down. (I have to admit to being glad that my celiac disease keeps me from tasting them again.)

A decade later, Lean Cuisine has certainly upped its game, although overall its record is rather 50-50 good to bad, with the better meals coming from the more flavorful cuisines such as Mexican or Italian foods. One of the reasons we chose to revisit their Salisbury Steak and Meatloaf is their new packaging: they seem to have rearranged some of their product lines to introduce what they appear to be calling "Lean Cuisine Comfort." This is as opposed to their "Simple Favorites" line, which used to house most of what we here in the US might call "comfort food." (We have a whole list of healthy recipes for comfort foods that you can make at home, in fact.) The line is so new that only two of the varieties even appear on the Lean Cuisine web site.

The panel repeated the order of our previous review by starting with the Salisbury Steak with Macaroni & Cheese. As mentioned in the previous review, this comes with Lean Cuisine's standard Mac & Cheese and this doesn't seem to have changed - it's creamy, cheesy, and the pasta is slightly mushy.

The panelists were rather perplexed by the Salisbury Steak itself, however. "It's just an oval hamburger patty with some gravy on it," one said with some astonishment. The gravy in question is brown and shiny and has little bits of cooked onions in it, but has little to no flavor except a slight saltiness. Despite the more tempting picture on the front of the box, there was just a single, lonely slice of mushroom to be found in the gravy.

The meat itself was reported to be "a lot smoother than a hamburger - like it's been nearly pureed and then molded back together." "This would make really good food for people with no teeth, I guess," said another.

"And there's nothing in it," said another panelist. "It's just... plain meat." In short, none of the panelists could figure out why anyone would want to eat this. 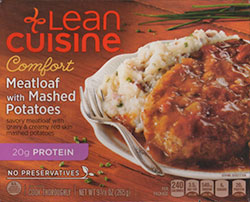 Next we turned to the Meatloaf - with some sense of relief. At least the panelists knew what it was and had some idea of what to expect. The good news is that the mashed potatoes have apparently improved over the last iteration, which had more in common with wallpaper paste than potatoes. These were reported to have "a fresh potato flavor" and "little chunks" to go with the evident red potato skins. There are even little bits of green onions.

The meatloaf itself, however, fared even worse than before. A very similar-looking oval piece of hamburger had more texture than the Salisbury steak (including bits of green pepper incorporated into the patty), but that texture was "gristly," not smooth. "Like they used cheaper meat in this one, if that's even possible," a panelist said.

The sauce was described as "thin," and "like cheap ketchup," despite the greater quantity of onions and green bell peppers scattered across the meatloaf.

Two thumbs (okay, all the thumbs in the room) down for these. Decent sides can't save these, even with prettier packaging.