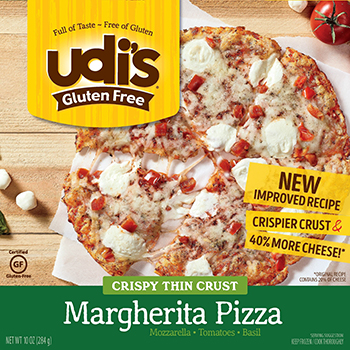 This will be our third time reviewing Udi's pizzas. The first time was all the way back in 2012 as part of a roundup of pizzas and we gave their Margherita Pizza low marks for having a flavor much like the lunch-lady pizza you had in grammar school. The interesting thing is that we mentioned the crust being crispy with a "buttery flavor" that was different from the plain Udi's crusts found in the freezer case at the time.

A year later we looked again at their Three Cheese Pizza and their pepperoni version. These were OK and the sodium was much lower. Again, we mentioned the thin crispy crust as being a plus for Udi's.

The thing that struck me first about looking at today's new Udi's frozen pizza packages is that they are labelled "NEW IMPROVED RECIPE" and claim to have both a crispier crust and 40% more cheese. An even crispier crust seemed promising, but when I turned the package over I was disappointed to see that the sodium levels have gone in the other direction. The pepperoni pizza (with a serving being 1/3 of the pie in the box) comes in at a whopping 940 milligrams of sodium (I just left that one in the freezer case).

The improved recipe is not what it claims. After cooking the pizza we found the crust is now not more crispy but is floppy and hard to manage. The best way to describe this is like the pizza I ate when I was a teenager living in New Jersey. You had to fold the slice lengthwise to give it any form. Using structural engineering to consume pizza because the crust is so floppy is, well, one style of making pizza, but it is not what one would describe as a "crispier crust" unless the previous recipe was simply raw dough.

I can live with that. New Jersey-style pizza was the pizza of my childhood, but the flavor of the Udi's Margherita Pizza is enough to make one want to swear off pizza completely. After you get past the floppy crust you are faced with toppings that have a flavor that is best described as musty or soapy. Sort of like damp cardboard smells. There is just nothing about this pizza to like. 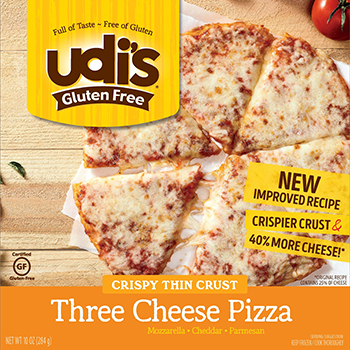 The Three Cheese Pizza fares better, and along with the floppy crust has almost exactly the flavor of the pizza you purchase by the slice on the boardwalk in Seaside, New Jersey. Cheesy, too salty, a bit grainy and authentically from New Jersey. Not bad for a company based in Boulder Colorado. The difference is that the New Jersey pizza will cost you a buck and this was $3.25 per portion (but it is gluten free).

Talk about truth in advertising. The recipe is not improved and the crust is not crispier.

All of this said, the true test of any pizza is how it tastes the next morning right out of the fridge. This is where the Three Cheese Pizza fares the best (don't even think about how bad the Margherita version is). It is everything you want in cold, day old, leftover New Jersey pizza. So if you want authentic New Jersey pizza, it's in the freezer case at your local grocery store.