I'm seeing more and more of these in the freezers: meals that are intended to actually serve two people, as opposed to meals that are disingenuously labeled as two servings when practically speaking they're only one. CedarLane's Spinach & Feta Pie is a good example: the numbers look great until you realize that not only is this two servings, but who's going to cook it, then cut it in half and only eat half of it? Then reheat the leftovers? Never! 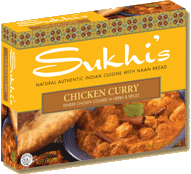 Today's offerings from Sukhi's Gourmet Indian are labeled "Serves 2" right on the front of the package, and judging from the amount in the dish, they should be a good, light meal for two people. Both of the entrees we're testing today come with naan, a traditional Indian flatbread. While there are oven directions for both meals (and the naan), we chose to microwave these on the assumption that if you're eating a frozen meal for dinner, you're likely not going to have 30 minutes or more to bake something (or if you do, you should spend that time making real food - here's our list of thirty minute meals that serve two).

The Chicken Curry is labeled "medium spiced," meaning it has a nice bite on the tongue, but it won't have you grabbing for water. The naan helps tame the spice; alternating bites of each would be a good idea. The curry itself is really good: smoothly spicy with cayenne and jalapeno and redolent of turmeric and cinnamon. The chicken chunks are a little dry but not off-puttingly so. Including the naan, each serving has 240 calories, 570 milligrams of sodium and 2 grams of fiber. I will warn you that the naan, like all microwaved breadstuffs, will be soft at first, but as it cools it will harden somewhat. If you serve these meals, heat the naan at the last minute. The panel reports that it's delicious, however - yeasty, "almost beery," with great, soft texture.Serve this meal with a side salad picked up from the market and you've got a very satisfying meal. 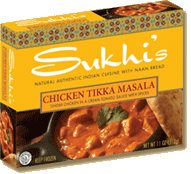 The Chicken Tikka Masala, on the other hand, was rather disappointing. While the Curry had a reasonable amount of chicken to go with the sauce, the Tikka Masala is easily 80% sauce by volume with (we counted) 8 pieces of chicken in it. (Remember, this package serves two.) It's too bad, because the sauce is really, really good: slightly sweet, savory, and creamy, tasting of ginger, lime, coriander, and cardamom. It's also labeled as "medium spiced" but the panel felt it was not quite as spicy as the Curry. For all the sauce's good qualities and the meal's fair numbers (260 calories, 650 sodium, 1 fiber), we can't imagine that anyone will be satisfied with only half of what's in the dish. Maybe the tiny amount of chicken was a processing error, but we can't be sure, so we have to recommend that you leave the Chicken Tikka Masala on the shelf.