Eating more fish is a key part of a Mediterranean-style diet, so we're always on the lookout for frozen meals that include fish or shellfish. The problem, of course, is that freezing fish or shellfish and then reheating it is difficult at best. Too often the delicate fish (or shrimp) gets overcooked, and in my opinion poorly-cooked seafood is likely the number one reason that people say they don't like fish: because they've never had any that was cooked well.

Today's offerings come from the frozen fish section of a local supermarket chain, so I'm not sure whether they're available in your area. That said, at $7.49 each, they're pretty pricey - this is as much as many people spend on their lunch from a fast food place.

Sea Tru prides itself on fully traceable and sustainable seafood. Their tagline is "quality with transparency." Their meals are packaged vacuum-sealed with a slide-off cover, so you can see exactly what you're going to get in your meal. No "serving suggestion" photos here! 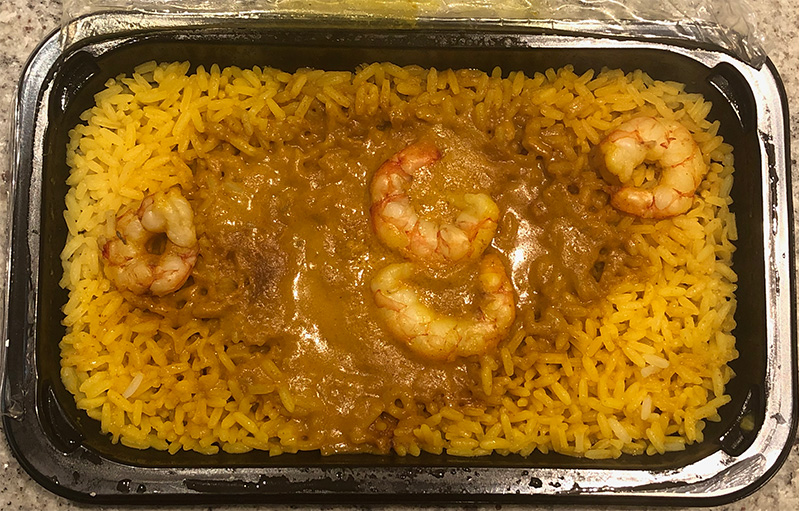 If the cost of $7.49 per package is one mark against the product, a second is that these are labeled as 2 servings per package. Look at the picture above: that's two servings?

Still, for a good seafood dish we can overlook the issue of number of servings, and even the price. If it's good.

This is shrimp. And rice. With a curry sauce. And that's all. No vegetable whatsoever. The (white) rice is a bit overcooked, but not much more than we've seen in other dishes. The sauce, however, makes the rice gummy, and tastes like nothing so much as eating a tablespoon of dry curry powder.

What's worse? My wife took a bite of the shrimp and said, "How nice to eat a rubber band."

It's true. I've been taking Spanish language classes recently, and one of the words I learned just in the last few days is the word for "eraser": las gomas. These shrimp were cooked before they went into the dish to be frozen, and the reheating simply overcooks them to the texture of those pink erasers we used in grammar school. This is a vile plate of food.

As with the Curry, the Shrimp Scampi is also labeled as two servings, thus the package's true Nutrition Facts is 540 calories, 740mg sodium, and 4g fiber.

The frozen meal looks a bit more appetizing than the Curry - there's penne pasta, the shrimp, and what appears to be a generous dollop of what is presumably scampi butter in the middle. 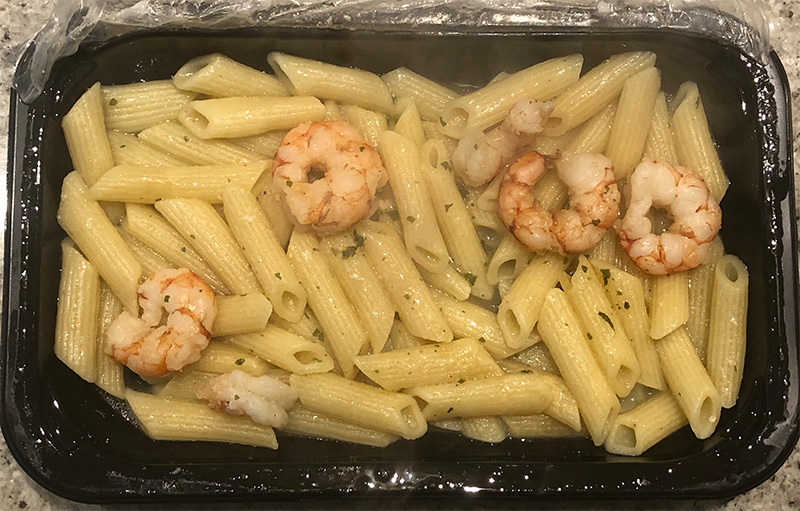 No, I have no idea where the scampi butter went.

This is plain, not-quite-mushy penne in water, not butter. It doesn't smell like scampi, doesn't taste like scampi, and for $7.49 it isn't scampi. Frankly, we've had better-quality pasta from far cheaper dishes.

After tasting these shrimp - salty, fishy, rubbery - we looked a little more closely at the Ingredients lists for both meals. The shrimp in both dishes were obviously pre-cooked before packaging, yet only the Shrimp Scampi described the shrimp as "Cooked Shrimp". Both packages, however, list the ingredients of the shrimp as "Water, Salt, Sodium Metabisulphite." That last ingredient is a preservative.

This seafood might be "responsibly sourced," but it sure isn't responsibly handled. Shrimp like these are enough to put anyone off of eating seafood. Instead, reach for a shrimp dish from Scott & Jon's - they're cheaper, probably available near you, and some of them are actually good.