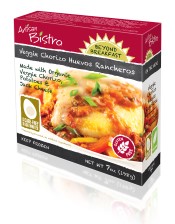 Just about every time we review a breakfast food I say it again: I don't understand the whole frozen breakfast concept in general. And after today's review I think we're just going to stop doing them (my wife says, "We'll see.").

The last time we reviewed breakfast foods from Artisan Bistro, a little over four months ago, we had their Mediterranean Breakfast Stack and Huevos Rancheros Verde. Both were pretty good, but salty. Really salty. Offensively so, as I said then. Today's offerings are not nearly as salty tasting: that's the good news. The bad news is that they're still offensive.

Both items we reviewed for today take 3 minutes of microwaving at "medium-high" power, then another 1 minute at maximum power. A total of four minutes, plus waiting for them to cool enough to eat. Keep that in mind; we'll come back to it.

First to be reviewed was the Veggie Chorizo Huevos Rancheros. This comes out of the microwave looking like nothing so much as a pale yellow hockey puck on a bed of an orange mush. That mush is apparently the vegetarian "chorizo," which has a fairly spicy, smokey flavor that is indeed reminiscent of chorizo. But it has an odd, almost grainy texture. Is this... polenta? 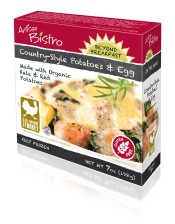 A look at the ingredients list helped us determine that this is in fact made of potato. This is deeply, deeply wrong. Artisan Bistro took a perfectly innocent potato, one that's never done anything to anybody, and turned it into something with the texture of grits. That's positively offensive.

It became doubly offensive when we tried their Country-Style Potatoes & Egg, which has really good potatoes served on a bed of diced kale, with cheddar cheese and a single, tiny piece of turkey sausage the size of a nickel. Both products are served with the same thin hockey-puck-sized egg white patty, which tastes almost watery - as if the freezing process had somehow made the cooked egg white into a sponge (also offensive). While there's nothing that could save the Veggie Chorizo, losing the egg puck and adding more cheese or a measurable amount of sausage to the Country-Style Potatoes would actually make it darn good.

Remember those four minutes these meals spend in the microwave? In those four minutes you could dice potatoes and kale, then you could steam them in a covered saute pan for ten minutes, throw in an egg, scramble the whole thing together, and in a total of maybe 20 minutes you could have a truly delicious breakfast. And it would cost you about 75 cents per serving. Compare that to the over $4.00 price tag on these breakfast meals from Artisan Bistro. Ugh. Leave these breakfasts in the freezer.