You gotta love a company that calls itself "Freak Flag Organics." That's some great marketing that's sure to appeal to the rebels and hippies (or people who think they're rebels or hippies). Right on the box it says "it's Freak O'Clock somewhere" and that their products are free of artifical flavorings, preservatives, are non-GMO, and also "NO we can't afford "Superfreak" as our theme song but we're hoping you can hum it in your head while you make dinner." We like a company with a sense of fun.

I spotted their four varieties of boxed mac and cheese and brought them in for tasting. This is the first time I've seen any of their products, although from their website it appears that until now they focused more on condiments, broths, and pestos. The mac and cheeses are so new they're not even on the website yet. (A representative of the company responded to my query to say that the products will be sold nationwide at Whole Foods Market and at Amazon starting April 1.)

Other than the packaging, these are made in about the same way as (almost) every other boxed mac and cheese: cook pasta, add butter and milk, add powdered cheese substance from packet, stir, eat. 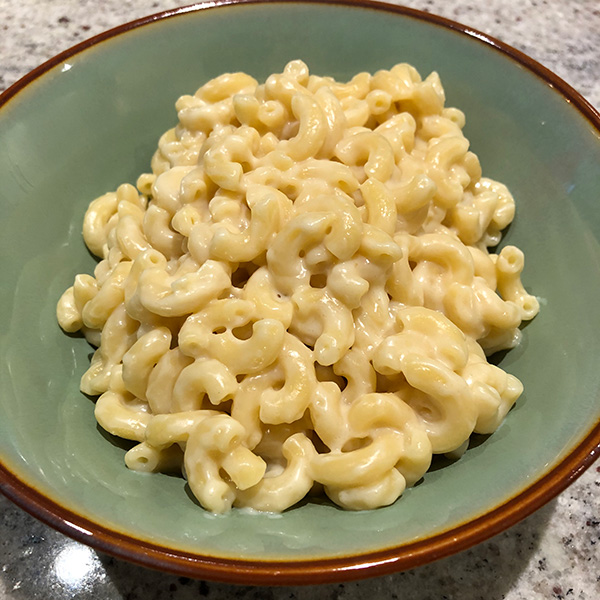 As with most boxed mac and cheeses, the package states that it's 2.5 servings, and for each (about 1 cup) serving the Four Cheese Mac has 350 calories, 290mg sodium, and 3g fiber. Of course the truth is that people are going to eat half the box (at least), so the true nutrition facts are 450 calories, 350mg sodium, and 2.5g fiber. Still pretty reasonable.

Note, however, that the picture above is of a bowl about 7 inches across and 2 3/4 inches high. It contains all of the cooked mac and cheese. Both (or 2.5) servings. Why so little? There's only 5.2 ounces of pasta in the dish - or 2.6 ounces of pasta per person. Yes, technically that's 2.5 servings of a 2-ounce serving of pasta, but the truth is that (almost) nobody is going to put away that half a serving for later.

We cooked the pasta for 9 minutes (the recommendation is for 8-10) and added the butter, milk, and dried sauce mix. Stirred until smooth, and got... pasta cooked a little less than we'd like (rather chewy, actually) and a sauce that's moderately cheesy and rather sticky, but not thick and creamy. "I think Kraft® might actually be better in terms of the creaminess of the sauce," my wife said. "That might be heresy."

Perhaps the problem with the flavor is that we used unsalted butter? We added a 16th of a teaspoon to the entirety of the bowl, mixed, and tasted again. Now the gentle mozzarella flavor comes through better, but the sauce itself is still underwhelming. Great packaging, but the all-important sauce is... meh.

We had higher hopes for the Southwestern Cheddar Mac & Freak. 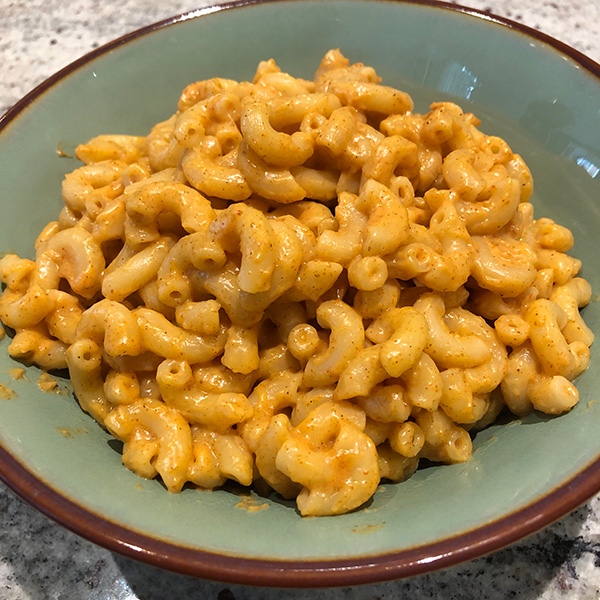 We cooked the pasta for 10 minutes and it came out perfectly.

This has a great scent of chipotle and cumin. Promising! Yet it suffers from the same problem as the Four Cheese: it's just not that creamy or cheesy - "If it weren't on the box and orange in color I wouldn't know it was cheddar," my wife said. There's an overall light chipotle flavor in a sticky sauce with just a hint of burn.

A look at the Ingredients list explains why it's not very cheesy: "cheddar cheese" appears 11th (eleventh) in a list of 16 ingredients in the cheese sauce mix, and "wheat flour" is the #1 ingredient.